And out came another horse, bright red. Its rider was permitted to take peace from the earth, so that men should slay one another, and he was given a great sword.Revelation 6:4.

I’m no expert on the Book of Revelation. To be quite honest, I’m not sure anyone else is either. But this I know: in the vision of John the Apostle, the drama which unfolds is of eternal significance. God’s plan for the cosmos will be fulfilled, and no detail will be omitted. One day, all of the ramifications of sin on this fallen planet – death, decay, crime, disease, war, and even sadness – will be swept away by a new creation. Christ’s new creation!

But by Revelation 6:4, we’re not there yet. The red horseman is on the loose, ushering in a tidal wave of unmatched violence upon the whole world. This will be the end of any thought that “we can make it just fine on our own, thank you.” This will be the boldface betrayal of the promises of humanism of an advanced civilization where innate human goodness has solved every cultural and societal ill. It will be a moment when – with crystal clarity – the godless will recognize that “peace on earth” is impossible without the Christ whose very birth signaled that message in the first place. 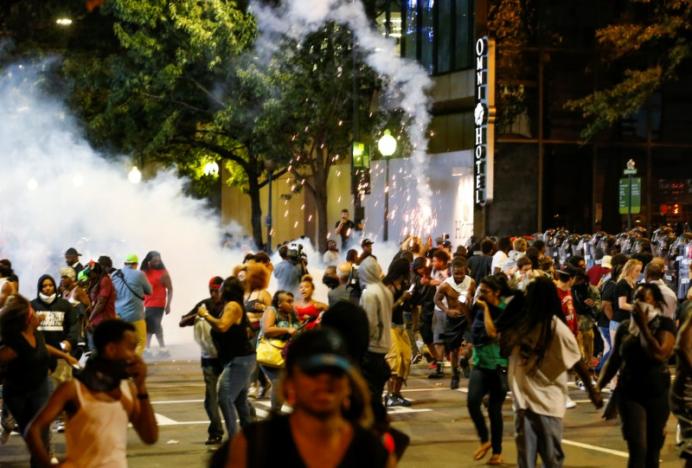 People run from flash-bang grenades in uptown Charlotte during a protest of the police shooting of Keith Scott. REUTERS/Jason Miczek

When I see the reports from uptown Charlotte, I am grieved. My niece, Briana, lives in the Queen City. She moved there to enjoy Charlotte’s robust economy, four distinct seasons, and some of the sweetest sweet-tea drinkers you’ll ever meet. This week hasn’t been all that sweet.

I am not foolish enough to declare this God’s judgment. Nor would I similarly label the murderous violence of Southside Chicago (now statistically off the charts). Nor Detroit with its virtual “no go” zones. Such theological proclamations are beyond me, and I’m forbidden by wisdom and life experience to go there. But I can tell you that – eschatological distinctives set aside – chaos and violence are hallmarks of the epoch of the red horse.

If you’re waiting for America’s golden age or glory years, please don’t. This is not so say that we’ve lost hope – for we still have all the hope we’ll ever need in Christ– but it is to say that we may be nearing the end of the hunt for another Eden which we have made. Truth is, we have monster weeds in this here garden.

Though we should decry racism at every level, one local Nation of Islam leader – solicited to speak at a press conference in Charlotte – praised Allah, lashed out at white America, promised more widespread rioting and looting, and called for a boycott of the city. Sadly, that is also racism.

Please join me in praying against anarchy. Anywhere and everywhere. And this is no call to passive prayer. Now is the time for us to love with great intentionality. By God’s grace and for His glory, we must keep our cool. As I said in Wednesday night’s Bible study: when emotions run high, logic runs low. The best gift you can give to those who are suffering through this turmoil is to deliberately pursue in genuine gospel-centered friendship someone whom the media might provoke you to reject, or even hate.

Utopia here and now? Don’t bet on it. But Jesus came, lived, died, and rose again to give us a world that’s even better (Matthew 6:33).