To Tell the Truth 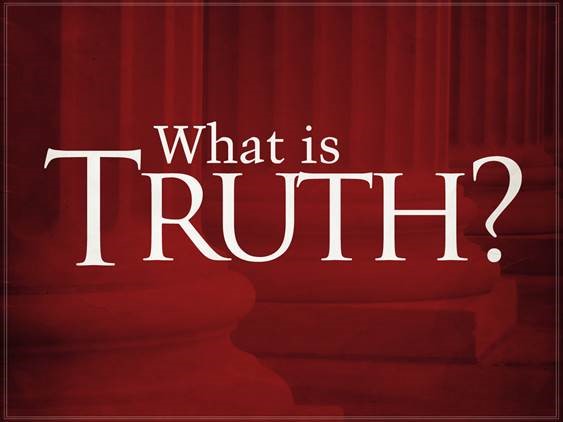 If you’ve been reading my blog for long, you know that – from time to time – I like to take up the matter of truth. What is the nature of truth? What does it mean for something to be “true”?

My hope is that you and I will stay sharp in our understanding of truth, as we serve the God who is Truth (John 14:6), and the God who has tasked us with making right and responsible judgments in regard to all the compelling and competing truth claims which bombard us on a daily basis (John 7:24).

When it comes to all the truth claims that are out there, how can we characterize them? Let me take a stab at this.

A. “Virginia became a state before Nevada.”

A statement of historical fact. A simple test: Does it correspond with reality? In this case, yes it does. True.

A statement of specific detail. The same test should be applied in this case.

C. “Among the three sides of a right triangle, the square of the hypotenuse (the side opposite the right angle) is equal to the sum of the squares of the other sides.”

A statement of mathematical fact. You may remember the  Pythagorean theorem form your own study of geometry.

D. “Nothing can’t create something.”

A statement of great generality. (I borrowed this term “great generality” from Dr. Bob Korn, who earned his undergraduate degree at Princeton and who specialized in artificial intelligence at the University of Wisconsin.)

This is a summary of the First Law of Thermodynamics regarding matter or energy. Though I’m no scientist, I’ll weigh in: true. But please forgive my double negative in D.

E. “Schindler’s List is a better movie than Ghostbusters.”

A statement of preference. When Greg Koukl was with us in March, he called this an “ice cream” statement. It’s a personal comment that represents my taste in movies – my favorite flavor – but it’s something that may not be “true for you.” When it comes to our personal styles and preferences, we’re free to disagree, and nobody is really “wrong” in a factual sense. We can even laugh at the nonsensical nature of funny movie lines like this one “from Dr. Strangelove): “Gentlemen, you can’t fight in here! This is the War Room.”

You can see why allowing for subjective “truth” in this category is harmless – but that would not be the case in the previous four categories. You might miss your train, or (far worse) you might get hit by the train because someone told you that trains and pedestrians can occupy the same tracks at the same time. (Maybe the Pauli exclusion principle really does matter.)

F. “We are all one with the universe.”

A statement that is untestable, scientifically. We can’t evaluate a claim like this in a test tube. What evidence would we weigh? (Disney’s Pocahontas is not enough.) Those of us who view the Scriptures as authoritative look to the Bible to test the accuracy of this kind of claim, and – apart from such a truth source – to debate this topic is absolutely meaningless.

A statement of morality. This presents no problem if you believe that God has the right to define truth, but it’s a big problem if you’ve bought into the popular notion that the only person to be feared is the person with the audacity (and ignorance) to announce that any behavior is wrong. (Even most “ethics” professors have succumbed to this craziness.)

Maybe these categories of truth claims will help us in our discussions of truth in days ahead. Being able to identify a claim will help us understand it.

Enter “Chrislam”. We’ll use William Lane Craig’s word to describe what is basically this: The Bible and the Quran fit together nicely, so let’s just syncretize Islam and Christianity. (We won’t let any outmoded notion of truth get in the way of these “two great religions” becoming one.)

Actually, attempts to unite Christianity and Islam are as old as Islam itself. In the late 6th century, Muhammad – who is described variously as a Tsabi and as a Hanif – was married to a Nasrani (a Jewish-Christian) named Khadija bint Khuwaylid by her cousin (the cousin was a Nasrani bishop). The bishop had encouraged his followers to seek refuge among the Nasara (Alexandrian Christians) of Abyssinia, and had – by the 630’s A.D. – established in Medina a “peaceful society” consisting mainly of Nasara and his own sect of Hanifs.

So go pursue the truth, my friends. Love the Truth! Feel free to enjoy a plateful of jumbo shrimp this afternoon, but please don’t sign up for any lectures on Chrislam. (You’ll get that later.)

2 comments on “To Tell the Truth”