The Horrors of Hate 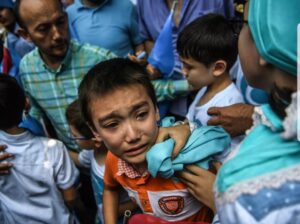 Some of this is quite graphic. For that, I apologize, but I want you to know what is happening in China. (This is not for your young children.)

I’ve been reading up on China’s internment camps, and – quite frankly – I’m having trouble sleeping. China’s northwest Xinjiang region seems to be the brutal regime’s center for its government indoctrination activities. I’m horrified by what I’m discovering. This unspeakable brutality is not limited to how certain Muslim minority populations are treated. Some Kazakhs (a Turkic ethnic group mainly in the Ural Mountains) and some Christian Uyghurs (mostly converts from Islam) are sent to these facilities as well, and I was surprised to learn that some members of the Han Chinese majority likewise are exiled to suffer within this sprawling network of “vocational training centers.”

I understand from reliable sources that other people groups are being targeted under the radar screen. We’re talking well more than a million people at this point, and you know as well as I that any publicized number from the communist government is grossly underestimated. What is happening is slavery and torture. All because any totalitarian government must stamp out every opposing voice, as well as any other voice which can’t be completely trusted for its total loyalty to the power at the top.

What most horrified me was taking into my own soul just how inhumanely the women and girls are regarded and treated. They are regularly, and often daily, left stripped of their clothing and handcuffed in their cells – while they await routinized rituals of gang rape. The assaults are not just physical, but they are intentionally mentally and psychologically torturous. The indoctrination is a total assault on the personhood of its victims, while the damage inflicted on our Creator’s image-bearers defies description. I won’t go into any more detail here, though I could, except to say that electric shock is used regularly to maximize the fear factor throughout the camps. It appears that the goal is, literally, to drive the dissidents out of their minds.

This is a human rights crisis if ever there were one.

How did China’s government land in this state of total moral bankruptcy? I think we need to think through our answer to this question thoroughly. If we don’t understand the disease itself, we’ll focus only on the symptoms. And, if we focus only on the symptoms, we’ll never discover the cure. China’s embrace of totalitarian brutality didn’t start in 1949 under Mao Zedong. More than a century earlier, the ideology of Karl Marx began to steamroll across the global stage. Marx absolutely loathed the idea of a free market. He contended that the market should be totally controlled by the state. Now, that sounds like amoral economic theory, but the reality is that the market – in the real world – includes the marketplace of ideas. That’s where this becomes more than a political concern, but a human concern.

In other words, if your desire is to completely control the market, then you have to completely control the thinking behind the market. You already know how well things worked out for Marx: a hundred million dead, entire economies collapsed, and entire communities destroyed. Similarly, Lenin believed that perfecting the government rested on one main issue: will the communists smash the capitalists first, or will it be the other way around? Because, in order for communism to prevail, you must have a ruling class possessing absolute power. That’s why democracy – and freedom in general – is an inherent threat to a totalitarian regime.

Rod Dreher makes a number of fascinating observations along these lines. One that almost made me wreck my car is this (I was listening to a podcast, so it’s not an exact quote): “When everything is politicized, you’ve reached totalitarianism.” Wow. Too close to home. Dreher believes that one of the reasons why Americans are susceptible to totalitarianism right now is because we have forgotten – or we are ignoring – history. But, and this is vitally important, Dreher also reminds us that “politics is no substitute for personal holiness.” What we need in our world, more than anything else is revival.

And that serves to remind me … as a Christ-follower, an amateur theologian, and a lover of the God’s Word and God’s world, I can’t end my analysis of any current event – in China or Possum Trot – with the events themselves, nor with a look at human history. I have to look even below that surface. If the Bible is to be taken seriously, then the ultimate ailment afflicting the human race is – and always is – sin. “All have sinned …” That would include the communists and the capitalists, and everybody in between, so you and I must keep our eyes on Jesus … lest we be blinded by our own false sense of self-righteousness. Let me say it absolutely clearly: I will advocate for freedom until my last breath, but the freedom I most need is freedom from sin and self.

When I think about the vast empire which is China today – and I have stood on the Great Wall and seen it with my own eyes – then I must see it through the tear-filled eyes of my Lord, who died for the Chinese people. Surely His heart breaks over these atrocities. Surely He is moving you and me to care, for such a time as this. The cure for hate is love, and there will be no love where there is no light. Here’s the miracle: despite the government’s insistence that there is no God, and its mounting persecution of believers, the church in China is growing! For this, we give God thanks and praise! Wherever there is the light of Christ, there is hope for people. Perhaps you and I will be praying for China like never before.

With you … for the global gospel,

6 comments on “The Horrors of Hate”