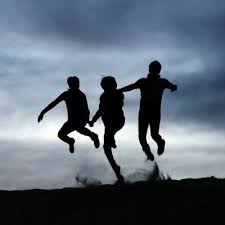 Last week I mentioned my plan to develop further my thoughts on fear and the gospel. I’ll continue to base this blog “mini-series” on First John 4:18. For purposes of review, then, here it is: There is no fear in love, but perfect love casts out fear. For fear has to do with punishment, and whoever fears has not been perfected in love.

Perfect love. That’s what our souls really long for, friends. So how can you and I walk, while still in this broken world, in the freedom of that kind of amazing and divine love? That’s the million-dollar question.

I was just given another book on Winston Churchill. If you’ve ever heard me talk about my trips to London, you’ve probably heard me talk about the time I spent at the Churchill War Rooms on King Charles Street. Absolutely fascinating! (And I recommend it highly once we’re able to scoot back and forth across the pond again.)

Here’s the deal about Churchill: he was a failure. At least at first. That’s what makes his story so intriguing to me. Winston Churchill absolutely refused to be defined by his failures. (Could that be the secret to success?) This is an encouraging thought from my perspective because we’re all guaranteed to fail. And we’ll fail at more than one thing. And we’ll fail more than once. It sounds cliché, but I’m saying it anyway: failure isn’t final. Surely we Christians ought to understand that – we’re the people who actually celebrate how Good Friday was followed by Easter!

I can assure you that past failures dog most of your family and friends. Perhaps they dog you. But I can also assure you that God has called you to an identity that is not marked primarily by your mistakes and regrets – or even by your worst sins. Please let that sink in. What God has for you in Christ is so much better!

Let’s start with the big picture of the world and of our lives: the Fall of humanity marks the greatest failure in history. You and I were “there” in the sense that Adam and Eve, our first parents, represented us. They rebelled. We inherited their sinful nature, which we validated by our own behavior. We’re still validating it in this sense: every person sins. That might seem like a sad thought, but it’s actually a liberating thought: my sins are not unexpected or unusual! And it is my lack of perfection which drives me to Jesus. I need a Savior, and He’s the perfect fit! The quicker I can accept the reality of human nature in general, and of my own nature in particular, the quicker I can abandon any thought of my ever achieving a perfect track record. The only perfect record I’ll ever have is the record of Christ! But that is more than enough, and I can make peace with my sin in the light of my Savior’s grace. That’s probably the best place to start overcoming my past regrets. (I’m not saying that all of our failures are the result of our sin, but it is my observation that failures precipitated by personal sin are the hardest ones to put behind us.)

And, before we go any further, I want to highlight the importance of repentance and confession. I wouldn’t want anyone to read this blog posting and conclude that Pastor Charles just wants us to forget about the past. I do want us to put the past behind us, but only if it’s covered by the blood of Christ. So, in case you’ve never really thought about it, to repent is to change one’s attitude and behavior. It’s a fruit of hearing and believing the truth of the gospel. Confession is simply “saying the same thing” about our sin that God says. First John 1:9 promises that God forgives us when we seek His forgiveness – that God “cleanses us from all unrighteousness.” Wow! That is the basis for a clear conscience, and I never want to omit the critical theology underlying the freedom. (Side note: don’t fall into the trap of not forgiving yourself. If God has forgiven us, who are we to exact a higher standard? That can be a subtle form of pride, so fight against it!)

One of the reasons why we can’t leave the past in the past is that we tend to crave justification. Keep that one in check. We’re naturally blame-shifters – back to Adam and Eve – and we’re nearly incessantly looking for someone to validate our legitimacy and accomplishments. So you can imagine how a “failure” – of any kind – works against that. But here’s the deal: the approval that we think we’ll find in others, we can find only in God. Make that gospel shift in your own soul and rehearse it every day! Read and reread Galatians 2:16. Hide that one in your heart, and let Jesus be all the justification that you’ll ever need.

And here’s a positive angle on this whole dilemma: trust God – and it’s O.K. to ask Him to help you with this – to use your past failures as present blessings! Hasn’t He promised that in Romans 8:28? God can use our “failures” to teach us a million important lessons and to wean us from self-addiction – nothing could be better or more helpful than that! What joy can be produced in us as we melt away and as Jesus gets larger than life!

Olympic swimmer Mark Spitz was interviewed during the 1972 Games. Hear this incredible line: “If I swim six and win six, I’ll be a hero. If I swim seven and win six, I’ll be a failure.” That’s the kind of performance trap into which you and I can fall at the drop of a hat. Whenever and however that happens, you can know that we’re running around searching for something which we’ve already been given in Christ: acceptance! Because we are His, acceptance is already ours.

So let’s grow up and stop nursing our past failures. They happened. Done. Over and out. But they’re not us. In Christ, you and I are “accepted in the Beloved” (Ephesians 1:6).

Accepted in the Beloved!