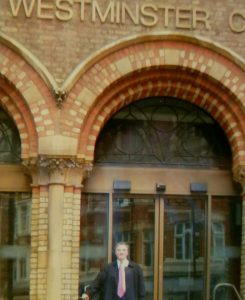 On one of our trips to the U.K., I was able to worship at Westminster Chapel in London. I was traveling with a friend who is a medical doctor, so it was particularly fun to visit the church pastored by Dr. D. Martyn Lloyd-Jones from 1938 to 1968. You may remember that Dr. Lloyd-Jones, a graduate of the medical school at London University, served as “Assistant to the Royal Physician” before he became a pastor. I have always admired MLJ because he stood so strongly against theological liberalism at a time when it was nearly battering to death the church in England. MLJ was a warrior. Against the prevailing tide, Westminster Chapel has enjoyed a rich history of faithful gospel preaching for nearly two centuries.

Thinking back to that trip in 2008, my mind raced forward to First Baptist Paducah now, and our present opportunities to make a global impact for the cause of Jesus Christ! Like Westminster in Buckingham Gate in central London, we are positioned near the center of our city’s cultural and commercial enterprises. This puts us near the schools and businesses where we can make a difference. After all, if there is an “inner city” in Paducah, we are close to it. Most often the toughest living conditions can translate into the richest spiritual open doors. Near London’s poorest slums, Westminster stood out as a light of hope. Even powerful leaders like Lord Shaftesbury were impacted by the church’s relentless gospel impact in the city. Orphans were loved and accepted and helped by the church, and people without employment began to seek the church’s help in finding a decent job. 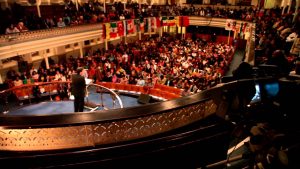 Over the years, Westminster Chapel remained in its central location, and held its gospel ground. Her people were gospel warriors. In 1904, a gifted preacher from Gloucestershire was called: Dr. G. Campbell Morgan. Dr. Morgan had traveled extensively in the U.S. alongside the famed evangelist D.L. Moody. On the other side of the pond, there were important gospel connections between D.L. Moody and J. Wilbur Chapman, who attended a Moody meeting in Chicago. It went on from there. Billy Sunday was influenced by Chapman, and converted at a street corner meeting at the Pacific Garden Mission. Billy Sunday held an evangelistic campaign in Charlotte in 1924. That led to the Charlotte Businessmen’s Club, which eventually became an invitation to Mordecai Ham to preach the gospel in 1934. And, you may have guessed it, that would lead to the conversion of Billy Graham on the first day of November that same year. (And who isn’t thinking about Dr. Graham this week?) I include all of this history simply to remind you that faithfulness to Christ always matters! Moody, Morgan, Chapman, Sunday, Ham, Graham … warriors!

Back to London for a minute … under Dr. Morgan’s leadership, Westminster began to shake up the city. The church made massive inroads into the neighborhoods of rich and poor alike. Overseas missions were sponsored. Effective social reforms were accomplished in the name of Christ. Young adults caught a kingdom-sized vision for something that would endure long beyond their own lives. (When I was at Westminster, the part that thrilled me the most was seeing so many young adults worshipping our Lord Jesus right in the center of a post-Christian culture.) Christian impact and influences expanded to the ends of the earth.

As you might expect – like any local church – Westminster has seen both ups and downs. It has not been an “easy” ministry by any stretch of the imagination. But God has done amazing things! He brought to the church faithful pastors like Dr. R.T. Kendall, a Baptist from America. Kendall was a warrior. Trained at Oxford, Dr. Kendall would – like MLJ before him – speak gospel truth into the heart of a society driven by materialism and secularism.

First Baptist Paducah, will we do it? Will we stand strong? Will we love with gospel truth, and will we embrace with gospel arms?

Perhaps Billy (Graham, not Sunday) said it best: “I despise all this attention on me … I’m not trying to bring people to myself, but I know that God has sent me out as a warrior.”