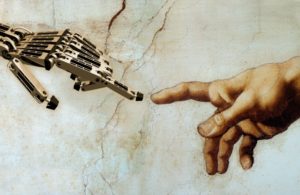 In 1992, Neil Postman wrote a book describing a society in which technology is deified. What may have seemed at least a tad farfetched then does not seem so now. Postman considered “technopoly” to be the most recent of three kinds of cultures in which new technologies “compete with old ones … mostly for dominance of their worldviews.” Drawing from Francis Bacon in the early 17th century, Postman described technopoly as a “totalitarian technocracy” which insists upon the “submission of all forms of cultural life to the sovereignty of technique and technology.”

Just yesterday, Google employees circulated an internal “dark arts” memo criticizing the company’s change to their employee calendaring system. It may seem like an insignificant matter to us until we discover the nature of the employees’ concerns: by monitoring who assembles in what room, Google may be amassing the ability to squash all dissent. Some employees fear that the company will stifle their efforts to organize. Perhaps on a more serious note, some fear that Google may be coming up with a way to prevent challenges to anything which an underling might question, like the company’s payouts to executives accused of sexual misconduct.

Do you remember the story about the boy who found a magic spool of thread? Pulling the thread made every day feel exciting for Peter, but – when he became an old man, and there was no more thread on the spool – he realized that his life had been lived without meaning. Peter had managed to avoid some pain and suffering by the distractions of thread-pulling, but a life of incessant distraction meant that he never experienced the wonder of living. A more important Peter said that you and I have a “living hope through the resurrection of Jesus Christ!” I suppose that our challenge today is not to trade that awesome promise of abundant life for a thread-pulling life mostly wasted while we stare mindlessly at our tablets.

And, friends – on a much larger scale – what do we risk losing in the public square? If we keep surrendering all our time and attention to the technopolies, will we and our children not pay a steep price for our abandonment and neglect? I think it’s high time that the body of Christ wakes up from our far-too-long nap, and that we light up our sphere of influence with something of eternal value! Google, Amazon, and Facebook may dominate the internet, but they don’t define the meaning of life. Big Tech ain’t got nothin’ on our Big God!

One of my jobs each week is to give you a few things to think about. I’m not an expert on anything, but I’m interested in lots of things, so here goes …

I love what Elliot Clark says in his new book, Evangelism as Exiles: “If you wanted to take America back for God, how would you do that? Generally, we think in terms of acquiring greater social and cultural power and influence; that’s the way we will ultimately bring this country into line. We’ve got to throw that away. We need to recognize that we have a gospel that doesn’t require us having a position and a status for it to be powerful … Let’s take America back for God – as in the sense of let’s preach the gospel, and let’s see lives change.”

2 comments on “Technopolies, Theologies, and Threads”