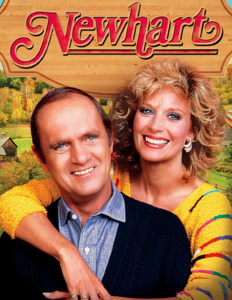 Last night Eileen and I were literally belly laughing as we watched an old episode of Newhart. It’s the 80’s television series set at the Stafford Inn in Vermont. In the sitcom, Bob Newhart played the part of Dick Loudon, and Mary Frann his wife Joanna. Former New Yorkers having to adjust to rural life. Just enough oddball characters to make the series hilarious.

In last night’s episode, upon Joanna’s urging, Dick reluctantly agrees to direct a play for the local community theater. Not really thinking about the personal consequences, instead of casting Joanna in the play’s lead role, Dick selects the younger Stephanie (Julia Duffy). That leaves the part of “the mother” for Joanna. Needless to say, Joanna is not amused, and the hilarity between Joanna and Dick begins.

A couple of weeks into rehearsals, Dick comes up with a plan to rewrite the script to please his wife. To make a long story short, and as you might imagine, disaster ensues on stage. You just can’t rewrite the script without destroying it.

This morning we’re off to Vanderbilt Medical Center, where Eileen will receive a pain injection, or maybe several of them. Fun Friday? Not. No belly laughs today. But good Friday? Yes. Because God is good, and He never changes. James 1:17. Stay tuned for Sunday!

Sometimes, especially when things get tough, we’re tempted to long for a rewrite. But we’re learning, slowly but surely, that the Writer of our life script knew (and knows) exactly what He’s doing.

And, dear friends, He is oh so very, very good.