As we made our way southwest toward the Bluegrass State, we paid a much-anticipated visit to Gettysburg, Pennsylvania. As you get to know our Joshua, you’ll discover that among his varied interests lies an insatiable passion for all things Civil War. He usually instructs us regarding the historical details that his mind guards like the proverbial steel trap. 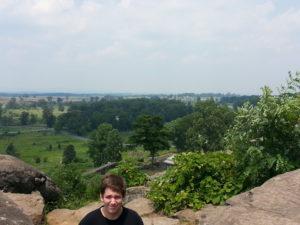 The photo is Josh standing on the top of Little Round Top. To his right and below are Plum Run and the Valley of Death, where — on the second day of the 3-day battle — Union forces were able to seize the strategic high ground. You can see some of the maze of boulders and rock formations that were the backdrop for Pickett’s Charge. Confederate General Robert E. Lee instructed George Pickett to strike the Union enemy, but the 13,000 Confederate soldiers had little protection from what followed.

The Union line opened up with such ferocity that 836 bullets struck a single 16-foot fence plank. The tiny town of Gettysburg, where no one had intended to fight in the first place, became an overflowing morgue from unthinkable casualties on both sides. Those who managed to live through the battle faced so much incurable disease that only one in four of the wounded survived.

The departing wagon train of maimed Southern soldiers was 17 miles long. The men fled the battlefield blinded by a driving rain that turned every road and path of escape into bloody mud. I wonder what they discussed as they began to realize the extent of their defeat in terms of the wider war.

The psalmist cried (Psalm 23:4): “Even though I walk through the valley of the shadow of death, I will fear no evil.” David understood that where there is a shadow, there must also be a Light.

Is our confidence in God today? Be it a day of triumph or a day of tragedy, are we holding on to the Lord Jesus Christ? Is our hope truly in the Lord?

The good news of the gospel is that the war against human sin has been won. At the cross, Jesus secured our pardon with His own blood. “It is finished!”

Yes, we’re still watching some battles play out, and sometimes those struggles against remaining sin seem a little too awful and close to home. But don’t ever confuse the skirmishes of sanctification with the ultimate victory of Calvary’s cross. As a matter of fact, the justification assures the sanctification (Romans 8:28-30).

If you’re in Christ but still longing for God’s affirmation, I’ll leave you with a quote from the professed self-talk of Big Daddy Weave: “Stop fighting a fight that’s already been won. I am redeemed!”