Rabshakeh. I’m reading through Isaiah in my personal devotions, and “Rabshakeh” jumped off the page as I hit Chapter 36.

The time is 701 B.C., and the Northern Kingdom has fallen to Assyria. Now Judah, the Southern Kingdom, is imperiled by this encroaching enemy. In fact, according to this passage, the king of Assyria has already taken the fortified cities of Judah. Not looking good.

The Rabshakeh of Assyria plays a prominent role in this text. We’re never told his name, but we believe that he’s the third-highest ranking officer in the Assyrian army. He approaches Judah’s officials with a message for King Hezekiah, and ultimately for the people: “On what do you rest this trust of yours?” Isaiah 36:4. Interesting question. Interesting question indeed. 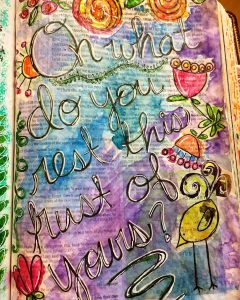 The Rabshakeh baits God’s people. “What God can save you? Who can stand against the Assyrian king? Are you dumb enough to lean on some protector whose power is not as evident as mine?” I’m paraphrasing here, but you get the point. It’s a full frontal assault.

“And, by the way, if you’ll only side with me, you’ll no longer have to worry about starving to death … in fact, you’ll have everything you’ll ever need. All will be well. Trust me.”

King Hezekiah has tough decisions to make. Will Judah join forces with Assyria? Will Judah ally with Egypt? Will Judah stand and fight? All the while, the taunts of the Rabshakeh are aimed at undermining the authority of the king in the eyes of the people. In addition to his other problems, Hezekiah may have a widespread rebellion on his hands.

“Who among all the gods of these lands have delivered their lands out of my hand, that the Lord should deliver Jerusalem out of my hand?” Isaiah 36:20. Not only does the Rabshakeh cast doubt on Hezekiah’s authority, but he casts doubt on the authority of God. If you go back and read Second Kings 18:17, you’ll discover that three of Assyria’s most important officers have already arranged for the capital city’s total surrender. It’s as good as done.

Friends, spiritual warfare is as real as the air we breathe! As Christ followers, we are never above it or beyond it. There will always be powerful voices all around us mocking the sovereignty of our God. Mocking the authority of our Christ. Mocking the credibility of our faith.

Their goal is to beat you down, and then to destroy you.

Like a magician as he waves his magic wand, the Rabshakeh promises that he holds the real power, and that the way of real life is in abandoning Israel’s God and serving the more obvious powers of this world. It reminds me of Satan’s “promise” to Jesus in the wilderness (Luke 4:5-7): “It will all be yours.” Think about how easy it would be to succumb to such an offer if you were already struggling and terrified.

Maybe that’s where you are today. You’re tired. There are some things about your life that you just can’t figure out, or come to terms with. Some doubts which used to be manageable have now become gigantic. You’re feeling deflated, rejected, and afraid. You’re not sure that the Way of Christ is the only way.

Here is my Word for you today: STAND. Ephesians 6:13. STAND FIRM. The Christ on whom you stand is more than able. He is a sure foundation when we are in trouble. He will never abandon us. And He is infinitely more invested in our ultimate victory than we could ever imagine.

STAND. Take captive every lie, and kill it.

“On what do you rest this trust of yours?”