Of Bugs and Braggarts 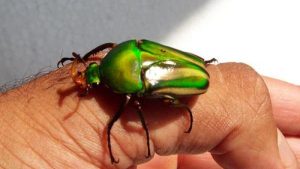 I don’t recall a time when more people were suspicious of government. For that matter, I don’t remember a time when people were more suspicious in general. As you know from your newsfeed, many Americans now question the integrity of the Federal Bureau of Investigation and the U.S. Department of Justice. The current climate of distrust is concerning, to say the least. Whether or not the distrust is based upon legitimate reasoning, the fact that we’ve landed here is unsettling for all of us.

It should come as no surprise to us that the truthfulness of time-honored government institutions rests on an increasingly shaky foundation the more that we, as a civilization, buy into the lie of moral relativism. We can’t have it both ways: “Truth can’t really be known. Oh, by the way, please tell the truth.”

This moral abyss around us sets up a personal struggle within us. Who can I trust? Does anyone really pursue justice? Is there no place where ethics and honesty are values for real? Can I take anyone at his or her word?

The Lord brings the counsel of the nations to nothing; he frustrates the plans of the people (Psalm 33:10). That sure seems to be playing out right now. But, I’m happy to report, that’s not the end of the story! The very next verse is pivotal: The counsel of the Lord stands forever, the plans of his heart to all generations.

There it is. We have hope! God’s plans and purposes count forever. In the end, chaos will not win. “History” is “His story,” you see. William Ernest Henley did not get it right: “I am the master of my fate; I am the captain of my soul.” The Lord replies: “Don’t kid yourself.”

New York Times best-selling author Raymond Arroyo just released his findings that “people tend to project their image and beliefs onto their image of God.” In other words, we imagine God to be like us – or we imagine God as we would prefer Him to be. The technical word for that is idolatry. It isn’t new, but it is sin.

Thankfully, no matter how hard we try to bring God down to our level, it just won’t happen. He is high and exalted (Psalm 97:9). He will not share His glory with another (Isaiah 42:8). He is all Truth (John 14:6). As such, God’s character can’t be manipulated. He can’t ever do anything other than that which is absolutely best, including that which is absolutely best for us.

A newly-elected politician had just arrived in Washington, D.C., and was learning the ropes from a ranking Senator. As the two stood looking out over the Potomac River, an old log floated by. The older gentleman remarked, “This city is like that log.” “How’s that?” asked the younger colleague. His new friend’s explanation was this: “There are lots of bugs on that old log, and every one of them thinks he’s steering it.”

Remember that next time you’re tempted to despair just perusing the headlines. Truth may be hard to discern these days, but the Lord will have His way. We may or may not see peace on the Korean Peninsula – or sanity on Capitol Hill. But our God can be trusted entirely.

2 comments on “Of Bugs and Braggarts”