In May 2017, the army detained three Christian believers who were gathering firewood, and forcibly took them into custody. Their bodies were found later; they had been tortured and killed. The gruesome scene I’m describing happened in the Kachin State of Myanmar, once known as Burma. 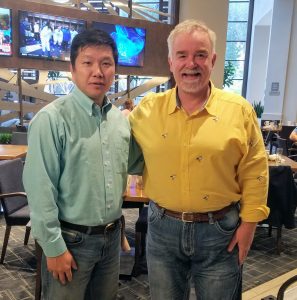 I want you to meet my new friend, Shawng Htoi. Shawng and I enjoyed breakfast this morning, discussing the land once evangelized by the great missionary William Carey, and the unique complexities and struggles of living out Christ’s gospel among the Burmese. Of particular concern to Shawng is how the church can help revive Christian truths and democratic principles in such a war-torn nation. In that part of God’s world, the persecution of well over four million Christians can be both intense and brutal.

In Myanmar, thousands and thousands of Christians live in IDP (“internally displaced”) camps. They have limited access to food and healthcare. Other Christ followers have their properties invaded by Buddhist, Muslim, or tribal authorities. The Radical Buddhist movement Ma Ba Tha proclaims itself as the protector of Buddhism, the country’s national religion.

In strikingly sharp contrast, America’s rich heritage of religious liberty can only be described as groundbreaking on the global stage. Enshrined in our Bill of Rights, and drawn from the Bible’s absolutely radical affirmation of every person created in God’s own image, we have been uniquely gifted with a freedom unparalleled in human history. I wish I could tell you that I’m consciously thankful for our religious freedom every day, but the truth is that I often need a wake-up call. Today mine came in the form of Shawng.

As we enter the season of turkeys and trimmings, please don’t forget the Pilgrims. Our Sovereign Lord transformed the pain of their persecution into the constitutional republic which you and I would inherit. Some people despise the notion of American exceptionalism, but I am not among them. All you have to do is look beyond your nose to discover how difficult it is for peaceful democracy and basic freedom to take hold and flourish. Here and now, we are blessed.

Let’s make sure to live out our uncommon blessing by taking Christ’s gracious good news to Myanmar, and to every other corner of the earth. It was Carey who said: “To know the will of God, we need an open Bible and an open map.”