For the Jewish people, Passover was an annual celebration of liberation from Egyptian bondage. And, by the time of Christ’s earthly ministry, Passover had become the perfect opportunity to express a desire for liberation from Roman bondage. Phonies claiming to be the long-expected Messiah had so often appeared on the scene, causing riots during the Passover season, that the Romans would bring in extra soldiers in an attempt to maintain order.

On the Sunday before Passover, Jesus came out of the wilderness on the eastern side of the Mount of Olives, as He fulfilled ancient prophecy of the coming Messiah (Zechariah 9:9). We often refer to it as Christ’s “triumphal entry” into Jerusalem. The palm branches were not symbols of peace and love nearly as much as they were demonstrations of Jewish nationalism.

At the same time, Pilate was parading on the west side of the Temple to oversee Passover, ready to put an abrupt stop to any chaos which might erupt.

At the same time, Jesus was riding on a donkey. Not a war horse, but a donkey. He wasn’t even wielding a sword. Or packing. 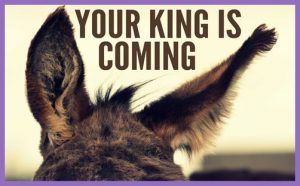 What kind of “Messiah” was this?

“Well,” the people must have reasoned, “we’ll give Him a royal welcome anyway.” You remember that part of the story: “Hosanna to the Son of David! Blessed is He who comes in the name of the Lord!”

We don’t understand the scene nearly as well as they did. They knew that their waving of palm branches harkened back to the time when the Maccabees threw off Greek rule in Judea. They all knew what they were saying by doing this. It was a form of protest. And it was high time for Jesus to prove Himself to be the man of the hour. The political hero. The winner. Their guy. There was an undeniable political agenda, and not even behind the scenes.

What would Jesus do next? Would He go the way of the Antonia Fortress, where the largest garrison of soldiers was housed in Jerusalem, and where Rome kept an eye on everything? If He did that, it could be the perfect time for a mob to rush the place.

But He didn’t do that. He went through the Eastern Gate, and into the temple. And He didn’t go in to “cleanse” it but to shut it down.

Let me say it this way: by the end of the week, Jesus would manage to make sure that everybody was hacked off. Now don’t get mad at me. I’m just telling you what the Bible records. Palm Sunday was the strangest of days.

So how should you and I attempt to translate the strangeness of Palm Sunday into wisdom for today?