Wins and Losses and Wins

“But a certain man drew his bow at random and struck the king of Israel between the scale armor and the breastplate …” First Kings 22:34. Not a chance!

Most of you know that Eileen, Joshua, and I lived in Chicagoland when Josh was a little guy. Our church was in Winnetka, and – being located north of the city – it was filled with loyal Cubs fans. And our years on Chicago’s North Shore included a few trips on the “L” (short for the “elevated” train) to Wrigley Field. One day Joshua asked me: “How come every time we come the Cubs lose?” Of course, he wasn’t alone in that observation or sentiment.

But win or lose – mostly lose – stepping into Wrigley felt like stepping into a slice of American history. The ivy. The sunbathers in the bleachers. The fans watching from nearby rooftops. The iconic surroundings and symbols. Waveland Avenue and Sheffield Avenue. The old center-field scoreboard. The world of Wrigleyville. The ballpark itself is 102-years-old. 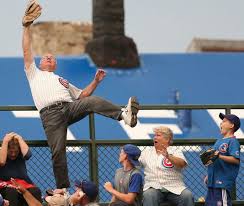 What happened Monday night? It was Game 3 of the National League Division Series, and the first Cubs home playoff game in seven years.

But of more interest to me is this: six unsuspecting men caught six home run balls. (Don’t tune me out, Cardinals fans …)

Jeff Baum, a 46-year-old school administrator from Lubbock, Texas, had flown to the city to run in Sunday’s Chicago Marathon. Baum describes himself as the “fat kid” who watched the Cubs on TV every summer of his youth.

17-year-old Nick Jarecki, from Deerfield High (close to Winnetka), plays baseball at his school. Jarecki exclaimed: “I had to catch it. A once-in-a-lifetime opportunity!”

Jim Gatto, who grew up on Chicago’s South Side, is a 46-year-old Wisconsin doctor. (His Uncle George was a third baseman for the Cubs organization for six seasons – never climbing out of the minor leagues.) Gatto had never caught a ball in all his years of Cubs games – not any ball, at any time, under any circumstances.

Paul Fromm is 30-years-old, and hadn’t attended a playoff game at Wrigley since 2003. He just moved back to Chicago after living in New York and Michigan. He found himself bleeding slightly after scrapping for his ball, but he didn’t care at all.

Wayward sunglasses notwithstanding, 39-year-old Gary Patterson of Oak Park caught his ball as it bounced off the chair in front of him.

Out of the 42,411 people in attendance, six men in those bleacher seats became a part of baseball – and in fact our national – history.

Some may refer to “those lucky guys,” but you and I know better. Luck is for fables and fairy tales. We live in an ordered universe. Recent scientific discoveries point to a finely-tuned world. In order for there to be life on Planet Earth, the gravitational force must be constant. The expansion rate of the universe must be constant. A life-sustaining solar system can have only one star. To quote our friend Greg Koukl: “There is no chance for chance.”

So, when you catch your home run ball, celebrate for sure! But don’t for a split second believe that it “just happened.”

Some baseball games we win. Some we lose. But, to know by faith in Christ a totally Sovereign God – that is always a win.

5 comments on “Wins and Losses and Wins”