Whatever Happened to History? 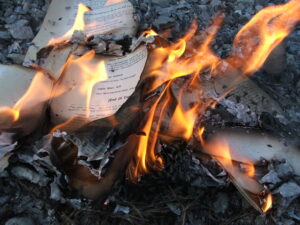 On Tuesday of this week, The Guardian reported that nearly two-thirds of young adults in the United States are unaware that six million people died in the Holocaust. Among adults between the ages of 18 and 39, 23% said they believed that the Holocaust was a myth. Almost half of that same group could not name a single ghetto or concentration camp established during World War II.

In an age where a universe of information lies literally at our fingertips, how can this possibly be?

According to a report by the National Assessment of Education Progress, the teaching of U.S. history to American students – specifically – lags behind all other subjects in our nation’s schools. The latest NAEP survey found that proficiency levels for 4th-, 8th- and 12th-grade students are in the 20th, 18th, and 12th percentiles, respectively.

If someone from another country desires to become a U.S. citizen, the legal requirement is U.S. residency for five years. After five years, as part of the standards for citizenship, a history test is administered. Despite language hurdles in most cases, 91% of the people pass. In all fifty states, the Woodrow Wilson Foundation gave the exact same test to native-born citizens, but a majority failed the test in every state except Vermont!

What in the world is going on?

Though not without our blind spots, America is an exceptional nation. By the grace of God, American exceptionalism is a reality in no small measure because of notable leaders like George Washington, Abraham Lincoln, and Ronald Reagan. We ought to be learning and teaching about these heroes (each of them, admittedly, quite human), along with Thomas Jefferson, Teddy Roosevelt, Harry Truman, and John F. Kennedy. But many of our schools seem to be glossing over not only the history of our American presidents but also the legacies of other critical thinkers and shapers of our democratic republic – if they’re presented at all.

Equally important, America’s Black History – which ought to be remembered and celebrated by all of us – is rich with significance. We should know all about the humble tenacity of Dr. Martin Luther King, Jr. and Rosa Parks, and how their courage blessed not only our society but Western Civilization. Likewise should our children know and understand these things, and their children after them. We need to know who signed the Emancipation Proclamation, as do successive generations need familiarity with that part of our history. Our kids should be learning about exceptional Americans like Justice Clarence Thomas, who is the second African-American to serve on the U.S. Supreme Court and currently its longest-serving justice. What I’m trying to say is that history – all of it – matters.

I’d like to state it plainly, now: our ignorance of history is dividing us.

If I may, I’ll share a few personal observations on the subject – quite literally – at hand …

An appreciation for history does not mean an endorsement of everything that’s happened.

There seems to be a common misunderstanding today: if I honor a hero from the past, I’m agreeing with everything that person ever said or did. Nonsense! Were that the case, nobody would ever be honored. Ever. While not everything in our history is good, everything in our history happened – so it’s true. And nobody can move forward, in a healthy way, unless we’re guided by the truth. I don’t know about you, but 2020 has made me ready to move forward with gusto! Attempting to erase or eradicate history is no path forward.

A key element of our walk with God is remembering what He has done in us, and in the world.

If we’re in Christ, God has brought us out of slavery to sin, and into a love relationship with Himself. We must never forget that! Our faith starts there and rests on that foundation of truth. If anyone should ever be perpetually concerned about history, it should be the people of God. Think about the nation of Israel. So much of what God required of them had to do with remembering where they had been – and from what troubles God had delivered them. Many of their prayers were focused on history, as well as most of their divinely ordained celebrations. Passover and the Lord’s Supper are historical markers in large measure.

The Bible is chock-full of important history, so surely history matters!

We tend to think of history as only looking back. Not so! Because of the grace of God in Jesus Christ, we can now view all of history through the lens of God’s unbridled and unending faithfulness. He is Lord over every chapter of history! He is the Sovereign over every corner, and every ruler, of the earth! So history helps us look up to God! And history helps us look forward – confidently – to tomorrow. That confidence does not come from our trust in any earthly hero – living or dead – but in the One who is “the same yesterday and today and forever” (Hebrews 13:8).

In 1948 Winston Churchill famously admonished the House of Commons: “Those who fail to learn from history are doomed to repeat it.” But how can we learn from it if we don’t even know it?

You and I are called to something better. Perhaps the truth will bring us together.

5 comments on “Whatever Happened to History?”