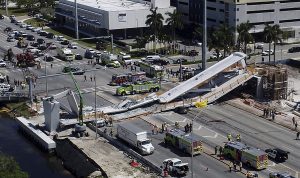 The pedestrian bridge was designed by the brightest of engineers to enhance student safety at Florida International University. Cyclists and pedestrians would be able to cross a congested eight lanes of traffic without fear. But, yesterday, the bridge collapsed. Cars below were crushed. The lives of at least six people were lost in the Miami-area tragedy. Now people are desperate to find out what happened, and who can be held responsible.

How can we not think about the tower in Siloam? If you remember Christ’s words in Luke 13, Jesus asks – in regard to the news of His day – referring specifically to the eighteen people who perished when that tower fell and crushed them: “Do you think that they were worse offenders than all the others who lived in Jerusalem?” The implication is that Christ’s questioners expected Him to say that those who died deserved to die, while those who did not die also received what they deserved. In other words, the people anticipated that Jesus would say that the survivors deserved to survive. Jesus’ stunning response is: everybody deserves to be under the falling tower. We all deserve to be under the collapsing bridge.

The moral of the story, in the words of Jesus, is simply: “Unless you repent, you will all likewise perish.” I don’t need to tell you that this view of human “goodness” and the reality of human sin has fallen on hard times. I’m not even sure the church believes it anymore.

When you and I observe a tragedy, we ought to perk up and pay attention. It’s really a moment of grace, because it’s another chance to discard some of our mindless preoccupations and to focus our affection on the Sovereign God of the universe! We can embrace Christ as our only hope, or we can continue to meander aimlessly through the faux logic of this world and the meaningless assessments of trending news offered by most of the loudest voices in the media. We deserve eternal calamity, but there is still time to trust the Son of God.

People in South Florida need a refuge. So do we. When it comes to human depravity, there’s not a nickel’s worth of difference between Miami and McCracken.

I tried to find “bridge” in the Bible. I couldn’t. The word is simply not there. Maybe it’s because we don’t really need one. We don’t need one because God doesn’t need one. He divides seas, remember? No bridge required. Not only that, but we must pass through the waters of difficulty (Isaiah 43:2). If we are His, Christ goes with us into those torrents.

We are humbled by falling bridges. We should be. We are no better than yesterday’s victims. No better, friends. But Christ still saves all who trust in Him.