As June bled into July, the latest chapter in an ongoing tragedy became more vivid. Dozens of people had risked everything in hopes of a better life, but ended up clinging to a capsized rubber boat. At least three babies, and over a hundred others, perished off the coast of Libya in one of the latest waves of the migrant crisis. Hundreds before them lost their lives as well, just this year alone. The crossing of the Mediterranean is perilous under such conditions. 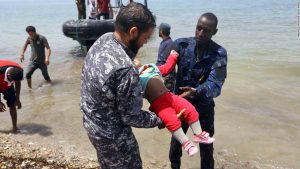 When we read the New Testament (Luke 13:1-5, for example), we discover that when Jesus walked the earth – as at most every other time in human history – the reasoning of many was to draw a precise line between tragedy (of whatever stripe) and the specific sin of a specific person (or group of people): to declare a direct cause-effect relationship between the two. “You sinned this way, and so this calamity has befallen you.” Sometimes the Bible does record concrete examples of the direct consequences of sin, but you and I must be humble in our assessments where the Scriptures do not speak so clearly.

You may also remember the account of the man who had been born blind, recorded in John 9. The question was: “Who sinned, this man or his parents?” Jesus’ answer was, “Neither!” And our Lord went on to explain that this particular affliction was designed for the glory of God. Of course both the man and his parents were sinners, but his blindness was the result of a much larger problem of sin: universal sin. Romans 5:12 describes this.

Sometimes, when tragedy strikes, we try to hide the truth about God’s sovereignty in a misguided attempt to comfort the afflicted by so doing. But to hide God’s truth is to provide no real comfort at all. (And sometimes God’s truth is given to afflict the comfortable!) We hide the truth about God and His sovereign power because we mistakenly conclude that the best way to minister to the hurting person is to tell him that God has nothing to do with his pain. But that’s not true at all. God is sovereign over the world that He has made. He is sovereign over the events of that same world. He is Lord of all. He is Lord of heaven and earth.

How great is this God whom we serve! I love the way Moses expresses it in Genesis 1:16 – “He made the stars also.” When I read that, I’m quite sure that there should be three exclamation points at least: “HE MADE THE STARS ALSO !!!” Isaiah rightly asks (40:12): “Who has … marked off the heavens?” We know the answer to that question: God!

We can’t even calculate the distance across this universe filled with stars. We do know that the nearest stat – other than the sun – is about 4.5 light years away. Since light travels at the speed of 186,000 miles per second, the nearest star is over 26 trillion miles away. And that’s just the nearest star! “HE MADE THE STARS ALSO !!!” The universe in which we live is so large that we can’t begin to fathom its grandeur. And yet, God has numbered every star and holds each one in its orbit.

There isn’t a random molecule in this universe that the Lord has made. Now we have the technology to look deep inside the human cell, and we discover there that the ingenious design and function within that tiny space screams the glory of God just as loudly as the enormous celestial bodies! This is the God of the Bible. He crafts every snowflake individually. He is the God of the whirlwind, the earthquake, and the storm. He sends every raindrop to water the parched earth. He parts the mighty sea so that His people can cross safely on dry land. And … only when the time is right … He calms the raging waters with the mere sound of His voice.

Our Sovereign is to be adored, and He is to be feared.

And, yet, this Sovereign God weeps. John 11:35. The shortest verse in the Bible, but don’t miss it. Christ is so moved by the reality of human sadness that He cries with His friends. Sometimes you and I should weep over the tragedy, heartache, and sadness we observe on Planet Earth. It can be overwhelming at times. But we don’t weep because we’ve forgotten who’s in charge.

We know. And so does He. Not one sparrow falls without His knowing, whether the sparrow is in North Africa or Western Kentucky.

Be still, my heart. Only perfect love can quiet this troubled soul. Only Jesus. The Triune God is enormous in His perfections and power, and in His grace, even when I can’t understand at all.