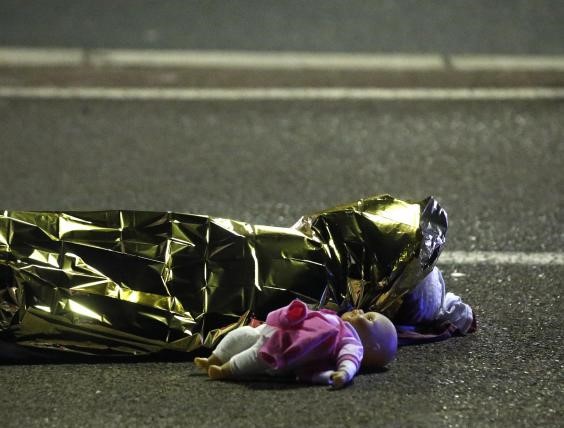 What could be lovelier than a holiday on the French Riviera?

Linda, a young mom, described the horror like this: “My husband picked up the kids and started running. I turned around and just saw so many dead people. I even saw a baby with its head totally crushed.” Another woman, who lost her eight-month-old son in the aftermath and panic of the attack, has been reunited with her boy after a Facebook appeal. Nice’s children’s hospital has treated around fifty children and teenagers, including two who have died from their injuries despite emergency surgeries. Dozens of people were literally run over, in barbaric fashion, by a huge truck driven by a French-Tunisian shouting “Allahu Akbar” (“God is great” in Arabic).

The death toll has now topped 80, with at least ten children listed among the dead. An American father and son, on vacation in Europe, perished in the brutal attack. According to France’s president, Francois Hollande, about 50 lives still hang in the balance. Bastille Day, France’s most important national day of celebration, is normally marked by fireworks at the Eiffel Tower. But this year’s festivities in Nice were interrupted by a terror strike with all the marks of an ISIS attack. These horrendous attacks are now happening weekly. As ISIS expands into new affiliates, like Bangladesh, my hopes are that NATO will declare war on ISIS – that a united and strong opposition can arise for such a time as this.

I will repeat something that I’ve been attempting to make clear at First Baptist Paducah for some time: What the world calls “radical Islam” or “militant Islam” is real Islam. I’m growing weary of calls by the media for “Muslim clerics” to clarify the teachings of Islam so that fewer people will become “radicalized.” I know this is unpopular to say, but I must say it: If an Islamic religious leader calls Muslims to anything less than “jihad” – “holy war” – then he or she is not teaching the religious tenets of Islam. Islam is a religious, political, and military ideology. It’s just that simple.

What about all the peaceful Muslims? Yes, most Muslims are peaceful indeed. But here’s the deal, at least in my opinion after studying Islam for two years: Peaceful Muslims are cultural Muslims. They’re ethnic Muslims. They share in at least one strand of the multi-faceted fabric which we might call a Muslim heritage. But they are not really practicing the mandates of the religion of Islam, which calls for the total eradication of “infidels” (non-Muslims). On our own Independence Day, our hometown newspaper’s front page included a very peaceful portrayal of Islam, and particularly the season of Ramadan. Though I greatly appreciate the desire to see our community thrive as a place of respect, diversity, and tolerance, I fear that we are sending the wrong message when we present the religion of Islam itself as innocuous. It is not. Sharia Law, which is the goal of Islam, is incompatible with Western Civilization as we know it. Islamic law, by nature, is completely hostile to freedom and the other ideals of a democratic republic.

Now on to what matters most. As Christ-followers, our most powerful weapons in this world are spiritual (Second Corinthians 10:3-6). You and I must make sure – within our own souls – that we are not against a people (Muslims or anyone else). When it comes to the Islamic world, we are to stand against the false ideology which oppresses Muslims – but we are to love, pray for, and attempt to win for Christ Muslims themselves. This may not be an easy calling to live out at times, especially when we feel threatened. But be encouraged, beloved church! In Iran, and in other parts of the Islamic world, there is tremendous and unprecedented spiritual revival taking place as I write these words. Muslims are coming to saving faith in Christ in a spectacular movement of the Holy Spirit on a never-before-seen scale. You and I are soldiers in the unstoppable army of the Sovereign King who reigns over an eternal kingdom of light – a light which dispels spiritual darkness for God’s own honor, glory, and praise.