I was invited on the evening of January 8 to participate in a relatively small meeting of ministry and civic leaders in Texas. My connections there are friends from Second Baptist Houston, as well as one of the sponsoring organizations called the American Renewal Project. It was a prayer meeting, and a call to overcome spiritual complacency and prayerlessness “for such a time as this.” You probably already know how burdened I feel that First Baptist Paducah become a praying congregation at all levels within our church family, so I flew to Houston very eager to learn more about how other spiritual leaders are motivating Christ’s sheep to pray.

By the time I departed early the next rainy morning, I understood the plan of action being proposed by those who organized the Texas event. Pastors across the nation are being asked to seek God for creative and real ways to motivate His people to pray for our nation in a spirit of “prayer over politics” – a very important priority distinction I might add – that the body of Christ might be known more for our humility and dependence on the Lord than for our particular political engagement. This is not to minimize political participation or other participation within spheres of cultural influence (Christ commissioned us as the “salt of the earth” and the “light of the world” in Matthew 5), but the point is that we ought to take our position in the public square with full recognition that political posturing can’t – and won’t – change the heart of America. Only the gospel of Jesus can accomplish that.

With desperate need for Christ’s intervention and power on the front burner of our passions, about half a dozen prayer gatherings – across the nation – will take place this year, perhaps bleeding into early 2016. The first will happen on the campus of Louisiana State University in Baton Rouge. In each host state, that state’s governor will call and convene the prayer meeting. Not one of the meetings is designed to include a single political speech – the only purpose will be local, regional, and national prayer and fasting after the example of the Book of Joel.

In Joel’s day the ancient Hebrew prophet was called to preach to a nation in absolute crisis. God used Joel to announce the only solution that was available to the people: they had to gather together, repent of sin, and pray desperately for God to intervene on their behalf. The specific command was for everyone to stop immediately what they were doing and come to a sacred assembly: to turn to God with all their hearts “with fasting, with weeping, and with mourning” (Joel 2:12).

Why did God desire fasting, weeping, and mourning – contrition and humility – from the people? A “solemn assembly” (Joel 2:15) was a gathering for people to acknowledge that their nation had drifted away from its foundations in morality, faith, and faithfulness. Because of their moral decline, the people were not prepared to face all of the external threats that were rising up against them. God wanted His people to understand that their internal moral and spiritual threats were far more dangerous than any external threat like economic crisis, uncontrollable disease, and even invasion by an enemy army. 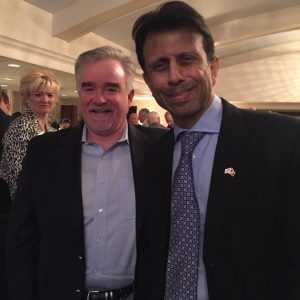 Governor Bobby Jindal of Louisiana will convene the first gathering on January 24. I had the honor of spending some time with the governor and hearing firsthand his Christian testimony and his heart for prayer. Governor Jindal desires that his state be the launching pad for what many are praying will become a national awakening of prayer, repentance, and revival. May the Spirit of God make such transformations (one person at a time, and one heart at a time) a glorious reality in our land in and in our day!

The Lord our God is “gracious and merciful, slow to anger, and abounding in steadfast love; and He relents over disaster” (Joel 2:13).

“Spare your people, O Lord, and make not your heritage a reproach, a byword among the nations” (Joel 2:17).