O Say Can We Sing? 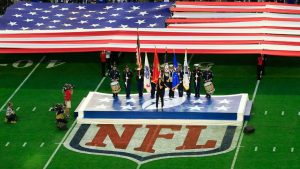 Among pro football stars a trend started with San Francisco quarterback Colin Kaepernick, who began kneeling during our national anthem. President Trump eventually called on NFL owners to deal unequivocally with players who disrespect the American flag. Further political protests erupted, including the decision of the Pittsburgh Steelers to stay out of sight when The Star-Spangled Banner was played before their Chicago game. The Seahawks and Titans followed suit. Arms were locked. Heels were dug in on both sides.

What is wrong? For starters, we have lost our respect for authority. And I don’t mean this as an indictment against the kneeling players only. It is more widespread than that. And it goes both ways. We have forgotten that to respect authority is to revere God (Romans 13:1). We have also forgotten to speak of our political opponents as those who – despite perhaps deep disagreements with us – are created in God’s image (James 3:9).

We have abandoned the pursuit of godliness. We have tolerated racism in our own hearts. We have used our money and power for selfish advancement and fleeting comforts. We have failed to limit our own freedoms for the sake of harmony and peace (First Corinthians 8). Until we are willing to pray and work for the common good, how can we expect a song or a banner to unite us? We are divided.

I’ve been reading through First and Second Samuel for my personal devotions. One text particularly strikes me, and it’s when David has to flee from King Saul (First Samuel 27). In fear for his life, David escapes to the land of the Philistines where Saul can no longer pursue him. There the king of Gath protects David, David’s family, and the 600 men who are traveling with David. But think back for a moment: way back when David killed the Philistine champion Goliath, on behalf of King Saul himself, who would have imagined that the Philistine king would one day have to protect David from Saul? Here’s my point: God uses all kinds of unusual people, and all kinds of really strange circumstances, in kingdom ways which you and I would never expect.

Maybe our Lord will use the mess that is the NFL to humble all of us. After all, our national entertainment only mirrors our national values. Maybe love will break out where there has been pride and foolishness. Maybe we’ll see people kneeling, but for different reasons. If that happens, we will know that God’s Spirit and gospel are on the march!

One day you and I will sing the songs of Zion. Every voice will be raised in unison as God’s redeemed people lift high the anthem of Christ. Race and ethnicity and social status, and even football, will matter no more. And we will be home.