For the last 2000 years, most followers of Christ have embraced some version of “natural law”: the idea that there are certain moral truths that are immanent in nature. In other words, we have acknowledged that there is some universal knowledge of right and wrong. Thomas Aquinas wrote extensively on natural law, as did the Protestant Reformers. (No, they didn’t agree on every point; that’s for sure.) Dr. Martin Luther King, Jr. referred to natural law in his Letter from Birmingham Jail … “I submit that an individual who breaks a law that conscience tells him is unjust, and who willingly accepts the penalty of imprisonment in order to arouse the conscience of the community over its injustice, is, in reality, expressing the highest respect for law.” Dr. King cited both Aquinas and St. Augustine. Even the humanist and lawyer Hugo Grotius based his philosophy of international law on the foundation of “natural law.”

Not only did the Reformers lean heavily upon their belief in natural law – the lex naturalis – but so did America’s Founding Fathers. Our entire system of Western jurisprudence, in fact, rests upon the conviction that there exists a natural law: an innate sense of right and wrong. Natural law runs deep and wide in our history, and in our government.

What does the Bible say on the subject? I submit, for your consideration, Romans 2:12-16. It makes perfect sense. Here’s just an excerpt: When Gentiles, who do not have the law, by nature do what the law requires, they are a law to themselves, even though they do not have the law. They show that the work of the law is written on their hearts, while their conscience also bears witness …

Whether or not we realize or acknowledge it, human societies make laws because God’s law exists. There is a proper moral order to the universe, but it didn’t start with us. The point of the Apostle Paul in this key passage is that unbelievers prove the existence of natural law every time they enact a law that prohibits them from running over each other with large tractors! People don’t interpret God’s law perfectly, of course, but they display – by even caring about “right and wrong” – that there is something very powerful about our God-given conscience. This is true even in the lives of people who claim that there is no God.

It is intriguing to me just how afraid people have become of Judge Amy Coney Barrett. By all reliable accounts, Mrs. Barrett is humble and kind, and exceptionally qualified to serve on the U.S. Supreme Court. (I won’t even go into all of that here, because that’s not my point.) But everyone knows that Judge Barrett centers her life around a set of strong moral convictions, and many are attempting to use that against her as an obvious disqualifier – as if faith and morality were inherently incompatible with our American way of life. 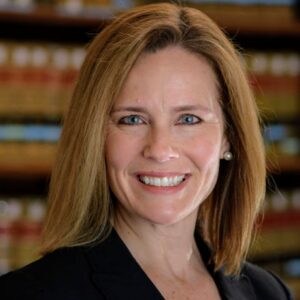 Could it be, friends, that we as a society have swallowed a giant deception hook, line, and sinker? That deception: we can pursue that which is true without pursuing that which is right.

I find it fascinating that Harvard grad and Notre Dame sociology professor Dr. Christian Smith posits that “human knowledge has no common, indubitable foundation.” He suggests that you and I spend most of our time making choices that are founded upon our unverifiable underlying assumptions. Smith refers to all humans as “believers” in that sense – claiming that we all live and act in conformity with our underlying perceptions of a larger, external moral order. Smith is hinting at what we often call “general revelation.” [General revelation is God’s clear display of His glory and power, for all to see, in His works of creation and providence (Psalm 19:1-3; Romans 1:18-20).] Dr. Smith contends that we’re all “believing” a storyline, or an all-embracing narrative, about the world around us. (If you’re interested in knowing more about this, please check out his book, Moral, Believing Animals: Human Personhood and Culture.) It was Christian Smith who in 2005 introduced the term “moralistic therapeutic deism,” which I’ve used multiple times in preaching what the gospel is not.

I would submit to you that Judge Barrett is a perceived threat to so many within our culture today because God stands at the center of her story. We no longer like any notion of “God’s law” – how preposterous! We’ll no longer tolerate the parts of our shared history which acknowledge our allegiance to an infinite Creator. We’ll even throw out the entire notion of natural law if we have to, just to get the job done! My theory is this: we’re terrified of the notion of a higher law because we’ve grown to love our moral relativism. “What’s good for you is good for you … and only good for me if I like it!” As a culture, we’ve taken up this weird system of valuelessness, and we’ve taken it up with a vengeance! So, the reality of an objective and supreme authority we must absolutely dismiss, lest our flimsy footing be discovered for what it is – and give way beneath us.

Absent a great move of the Holy Spirit in our land, I think that our American belief system is unsustainable. Our dirty laundry is showing. It is more than dangerous – it’s also ludicrous.

Are we just animals, or are we divine image-bearers? All of us must wrestle that question to the ground. And here’s why it matters. Unless we understand the Bible’s storyline – the only storyline that counts – we’ll never understand the world. And we’ll certainly never understand ourselves. All of us are believing a storyline. And – if your storyline is the storyline of Scripture – you can be absolutely certain that your life rests upon the steadiest of foundations.

Please allow me to share with you some things which I believe are going to crash in around us, as a society, unless we embrace God’s story …

Let me be clear. There is a reason why people are so afraid of Judge Barrett. In a word, that reason is abortion. Could it be that – on some fundamental level deep within our souls – we all know that taking the lives of our children is, simply, wrong? And people are afraid that Roe v. Wade, which read into the Constitution a “right” which was never there, will crumble before our eyes the moment we have five justices who are willing to say: “The king has nothing on.” And crumble it should. We can stick our fingers in our ears if we want, but the way of life is to listen intently to the voice of God.

One more thing: right now could be the finest hour in history for the saving gospel of Christ! We don’t need any more “moralistic therapeutic deism” – which says that the central goal of life is to be happy and to feel good about ourselves – but we desperately need Jesus and His finished work on our behalf! He is risen from the dead, and He is alive! And He is Lord of all!