Miscellanies of a Lesser Mind (Mine)

Sunday I preached morning and evening at Calvary Baptist Church in Windsor Locks, Connecticut. Thanks to all of you who prayed for me. Calvary Church sets aside one weekend every year to celebrate our Reformation heritage, and it was a treat for me to be invited to fellowship with some of our brothers and sisters who are serving Christ in the Northeastern United States.

The city of Windsor was founded in 1633, only thirteen years after the Pilgrims landed at Plymouth Rock. With cell phone camera in tow, I set out from there. My longtime friend and host, Pastor Duane Farley, and I were able to walk the main street of absolutely picturesque Longmeadow, Massachusetts. I included some photographs of the church on the town square. As you can see, there’s nothing quite like autumn in New England.

If you know much about me, you know that I enjoy church history. I wanted some of my downtime to include a dose or two of Jonathan Edwards. Edwards is one of my heroes. “Resolution One: I will live for God. Resolution Two: If no one else does, I still will.”

You may remember that Edwards graduated from Yale at the age of 17. He was a brilliant theologian, an insatiable student of the Scriptures, and a passionate preacher of the glorious gospel. “The happiness of the creature consists in rejoicing in God, by which also God is magnified and exalted.”

Much of the preaching ministry of Jonathan Edwards and America’s Great Awakening took place in the Connecticut River Valley. Edwards was born in 1703 and grew up in East Windsor, which is now South Windsor. Go figure. In 1743, while the pastor at Northampton, Massachusetts, Edwards preached the famous sermon, “Sinners in the Hands of an Angry God” at Enfield, Connecticut. You’ll see a photo of me at the Enfield site and a shot of the church building now at that location.

In 1740 Edwards wrote to the great evangelist George Whitefield (whose burial place I did not get to see on this trip, but perhaps next time): “May God send forth more Labourers into his Harvest of a Like Spirit, until the kingdom of Satan shall shake, and his proud Empire fall, throughout the whole Earth and the Kingdom of Christ, that glorious Kingdom of Light, holiness, Peace and Love, shall be established from one end of the Earth unto the other!”

Jonathan Edwards is buried at Princeton, where he had served for a brief season as university president. Jonathan’s father, Timothy, pastored for 64 years and died the same year as his son (1758). Timothy is buried in a beautiful cemetery in South Windsor, where I discovered grave markers dating back to the French and Indian War. Timothy’s epitaph reads in part: “The man of God who nobly pled his Master’s cause …”

May the same be said of each one of us, and of the people called First Baptist Paducah. Happy Reformation! 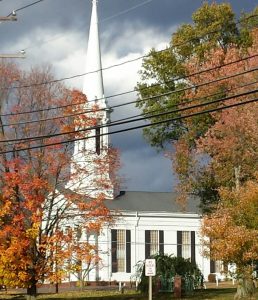 3 comments on “Miscellanies of a Lesser Mind (Mine)”