Lord of the Nations

Do you matter? Does God know who you are, and where you live? Does your life count? Are you important in the grand scheme of things?

Is human history marching toward any kind of goal?

The last verses of the Book of Ruth capture my attention this morning (4:13-22). Another one of those sections of Scripture that we’re tempted to rush through because we’re looking for something more exciting.

Talk about life turning on a dime! God simply put Ruth in the right field, with the right farmer. That’s all it took. Ruth the Moabitess has been transformed from “foreigner” (2:10) to “not (even) one of your servants” (2:13) to “servant” (3:9) to “wife” (4:13) – all in a short period of time. All because she met that one farmer, the kinsman-redeemer Boaz.

Now Ruth and Boaz are happily married, and Ruth gives birth to a baby boy.

I love Verse 17. And the women of the neighborhood gave him a name, saying, “A son has been born to Naomi.” They named him Obed. He was the father of Jesse, the father of David.

In case you’re unfamiliar with the story, Naomi is the new baby’s grandmother. She was Ruth’s mother-in-law.

As far as I know, this is the only time in the Old Testament where folks other than a child’s immediate family members are present for the child’s “naming day.” It’s really a community-wide celebration.

This baby is Grandma Naomi’s “son” in the sense that he will restore the family name of Naomi’s deceased son, Mahlon.

Now when we come to a genealogy like this, we’re tempted to skip over it. But don’t do that. This particular genealogy from Boaz and Ruth to David appears in four other Bible passages. It must be significant.

Not only will Obed’s life signify the restoration of lots of dreams that had died way back in Moab, but Ruth’s great-grandson will be King David. Yep, the King David.

God fulfilled the greatest hope of His people through the lineage of David’s grandfather, who was born to Ruth the foreigner. When the New Testament later opens, it starts with “the genealogy of Jesus Christ, the Son of David.” Jesus was the Kinsman-Redeemer, you know. The Light of the nations. Lord of all.

Meanwhile back in Ruth, there’s another genealogy spanning nine centuries and ten generations. Since King David’s family tree reaches back to Perez, we can conclusively establish that David’s lineage extends back through Judah (Genesis 49), Jacob (Genesis 28), and Isaac (Genesis 26) all the way to Abraham (Genesis 12). Absolutely amazing! 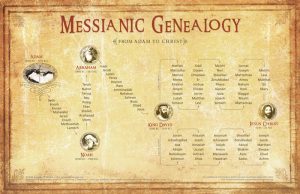 The next time someone tells you that the Bible is a hotchpot of random unreliable stories, tell them you know better.

The person you meet today may be the person whom God determined, before the foundation of the world, to change your life. Or maybe you’re meant to change theirs. Or both.

The Bible is one story of one God, and one people whom the one God has called out for His glory. You and I are called to be part of that cosmic, wonderful, and unstoppable plan.

Coincidence? Not a chance.

God is raising up a people from every nation, tribe, people, and language. Lord, I want to be in that number.