I pray that your 2014 is off to a great start, and I’m so grateful to God to be part of life’s journey with you. 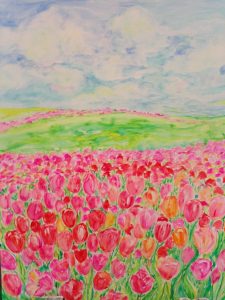 I know that some of you are wearied by the persistently gray and wintry weather. Eileen and I have a dear friend in Illinois, Lois, who is an artist, designer, and decorator. Right smack dab in the middle of winter, Lois paints beautiful springtime scenes. This is her latest. Enjoy! At least your heart can be warm.

I’m not sure if this is the appropriate forum, but I want to weigh in today on something that we as believers better get right – because just about everyone out there is getting it wrong. It comes from the lips of Jesus, and the Sermon on the Mount: “Judge not, that you be not judged” (Matthew 7:1). I am quickly arriving at the conclusion that there is perhaps no verse in all the Bible that is more widely misunderstood and misapplied.

Let me begin by giving you my opinion regarding what this verse can’t possibly mean:

Pluralism is the undeniable fact that there exist a number of views, values, opinions, and practices among the members of our society. Radical pluralism – beyond simply calling for all people to be respected (an idea that we would clearly support on Biblical grounds) – labels any person who expresses a moral viewpoint as “intolerant” or “bigoted” or “hateful.” Jesus talked a great deal about sin. He wasn’t hateful, but was the very embodiment of Love.

2. It can’t be an endorsement of moral relativism (no absolute right or wrong).

Moral relativism is the conviction (we might even call it a “religion” because people hold to it with such gut-level tenacity) that there are no absolute standards. This view of “truth” (which actually renders truth unknowable) is not only pervasive in our culture, but gaining momentum. But we don’t have to look very far in our Bible before we figure out that God is holy, that He defines holiness, and that He has demanded absolute holiness from us (Leviticus 19:2 for starters). Were God’s holiness not reality, there would be no need for the gospel of Christ.

The God of the Bible has made it abundantly clear that His people are not to act like the people who aren’t His. God’s Word clearly teaches that the world has its standards, but that God maintains the only standards that count.

Christ has described us – in this same sermon – as “the salt of the earth” and “the light of the world.” I think you would agree that our functioning as a moral preservative and moral illuminator would be nonsensical if we were forbidden to tell the truth about matters of morality.

Jesus has already told us to let our “yes” mean “yes” and our “no” “no!”  That doesn’t allow us to hide who we are in the Lord just for the sake of “getting along” or what some call “political correctness.” (I suppose we could also call it “political politeness.”)

Tolerance, in its noblest sense, is a good thing. It’s respect for others. I’m all for it. But in our day “tolerance” means mostly “Hush!” Now there’s a place for keeping our opinions to ourselves, but – if that’s to be standard operating procedure for God’s people – then  a whole lot of prophets and preachers and faithful witnesses for Christ have died in vain. No, we are God’s ambassadors on Planet Earth – and that will mean at times saying unpopular things and being rejected for it (Luke 10:16).

The Bible is about life and death – heaven and hell – clearly matters of eternal significance. You and I at times must take up subjects where sparks may fly! Jesus certainly did on numerous occasions that are recorded in Scripture. Paul too.

I’ve gone on long enough about what Jesus didn’t mean. I’ve given you plenty to chew on for today. So I’ll spend the next blog entry or two trying to describe what kind of judging Jesus is prohibiting in Matthew 7:1, as well as what kind of judging we must engage in as faithful followers of our Lord and Savior.

4 comments on “Judge Not”