Honor Where Honor Is Due

“Is life so dear, or peace so sweet, as to be purchased at the price of chains and slavery? Forbid it, Almighty God! I know not what course others may take; but as for me, give me liberty or give me death!”

Thank you, Veterans. Thank you. Just three days ago, we exercised the gift of democratic process that military members of the past helped ensure. We are most grateful for your service, and we recognize that it was a sacrificial service that less than one percent of the American population is willing to shoulder.

I can recall protests against our military from among my earliest memories. I was born in 1963. Though my father served in Vietnam, I came into the world during a season of American life marked by student demonstrations which labeled heroes as villains. I’ve always loved my country but, as I’ve aged well into my late 30’s J, my sense of patriotism has both deepened and widened. 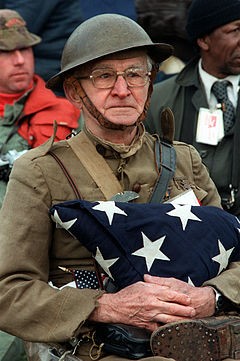 And I’ve been to places where I’ve wept, literally, upon boarding my flight bound for home. Were they tears of joy? No. They were tears of profound sadness because I felt so utterly helpless in my small attempts to make any difference whatsoever. I remember flying out of Haiti after the earthquake feeling so guilty that I was able to step onto a 757 and get out of there. And then I felt horribly sad and selfish because I hadn’t given my last twenty dollars to the young woman who had tried to sell me some stupid trinket at the airport at Port-au-Prince.

It is on this day, November 11, 1918, that Private Harry Gunther from Baltimore was killed. That may seem insignificant to you, but it’s important because Gunther was the last American killed during World War I. It was also on this date in 1918 that Germany signed the Armistice treaty – in a railroad car – in Compiegne, France. That marked the end of the First World War. We all know at least something of why this day matters, but perhaps our veterans need more from us than just a word of thanks.

Over 17 American veterans kill themselves every day. That is a rate at its highest level in history. And current members of the United States military are taking their own lives at a rate of one a day. That’s another tragic statistic, as suicide has become the leading cause of death among our troops. I would urge you to check out the Disabled American Veterans (DAV), the Wounded Warrior Project, and Homes for Our Troops. You can also donate your frequent flier miles through the Hero Miles Program of the Fisher House Foundation, as a way to help bring family members to the bedside of the injured.

If you have veterans in your family or within your sphere of influence, pray for and with them. Be an encourager (First Thessalonians 5:11). Be a friend (Ecclesiastes 4:9-10).

St. Augustine said that “the purpose of all war is peace.” May Christ’s peace be yours today and forever.