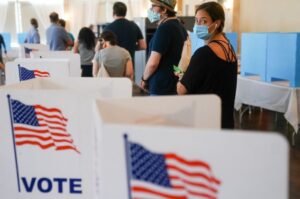 This is not meant as a politically partisan post, on any level, but it is a post about my concerns regarding our American republic. My prayer is that my words will be “heard” in the spirit of grace with which I will attempt to communicate them.

I am very apprehensive about the integrity of our recent national election. Never in a million years did I imagine that I would ever have to say something like that! This is the United States of America, after all. We are not Venezuela. We are not a banana republic. We are descendants of the Pilgrims, whose steadfast convictions about personal freedom made their way into our nation’s earliest governing documents. And here’s why I’m deeply concerned: if you and I can’t trust that our votes are counted fairly, then the very foundation of our self-government is gone.

Please do not misunderstand me. I am not saying that I know that Joe Biden lost the election. Far from it, in fact. Mr. Biden may well have won the election, just as the current numbers and media projections indicate. But my concern is that there are some very credible people alleging that voter fraud was a serious issue in the swing states of Arizona, Georgia, Michigan, Pennsylvania, and Wisconsin. Perhaps this is just more political drama, as if we haven’t had enough of that in 2020. But my suspicion is that this is more than political theatre. So I don’t want to get into the weeds today about this particular allegation vs. that particular defense – we have courts in which those matters can and should be settled – I simply want to raise the issue of why election integrity ought to matter to every American. And to every follower of the Lord Jesus Christ.

This is not about defending President Trump. In fact, I’ll quote Warren Christopher, former Secretary of State under President Bill Clinton: “The importance of getting it right outweighs the importance of rushing to judgment.” Those words came out of the Bush-Gore election controversy in November 2000. They still apply.

And, while we wait, don’t lose heart! Our American Founders very wisely established a division of powers for times such as this. We can all side with James Madison: “All men having power ought to be distrusted.” What did he mean by that? I think Madison meant that we all need accountability. Democrats, Republicans, and Independents. That’s how America works best.

If people are making dishonest claims about election fraud, I pray that the Lord will silence and sideline them before they cause any more harm. But, if people are attempting to cover up election fraud, my prayer is that the Lord will expose both their actions and intentions. America needs to know the truth. That, I think, should be your prayer and mine. It should be a bipartisan desire and effort. It should bring us together, right now, out of a shared respect for the integrity of our American vote.

Our nation desperately needs the wisdom of Almighty God: “A false balance is an abomination to the Lord, but a just weight is his delight” (Proverbs 11:1).

May God save America from becoming a banana republic without the bananas.

5 comments on “Free and Fair”