We’re home! Well, not exactly. Not quite heaven yet. But Kentucky is close. The Uganda Mission was a great success, and we’re as home as one can be this side of eternity. 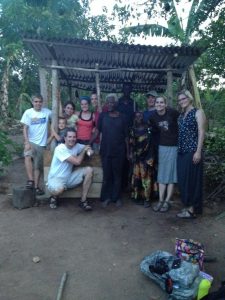 Eileen and I have a dear friend in Oldham County named Loretta Trulock. Cross-stitched and hanging in Loretta’s breakfast nook are these words: “You never really leave a place you love. Part of it you take with you, leaving a part of you behind.” That sums up our situation rather succinctly. Our team flew home with an affection for Uganda that we’ll carry with us as long as we live. The Ugandans are beautiful people, and we could not possibly have been more warmly received among them. (I thought you might like to see a photo of one of our completed “kitchens.” The Mama of the family was so happy with her new place to cook that she danced and danced after we drove the last nail into the tin roof.)

Though English is Uganda’s official language, stemming from colonial times, we quickly learned that many Ugandans don’t speak a word of it. Especially in Southern Uganda, in and around the capital city of Kampala, some 16 million people speak Luganda – which is in fact the most widely spoken Ugandan language. The language is marked by subject-verb-object word order, and by notable distinctions between long and short vowel sounds. So a subtle shift of pitch on a single syllable completely changes a word. Needless to say, we did not return to you fluent in Luganda.

But despite the potential language barrier, Jason and I had a few opportunities to teach pastors and youth ministers. And our entire team was privileged to be invited to lead several evangelistic outreaches among the local schoolchildren. But mostly we just “loved on” the people. (See, Paducah is rubbing off on me. “Love on!”)

And we “loved on” each other too. You don’t share cold-water showers, small sleeping spaces, early mornings, strange foods, cramped vehicles, sweaty clothes, and stinky shoes without being tested in the category of “Love one another.” In John 13:31-35, Jesus declared such behavior the evidence of bona fide Christian discipleship. My feet may smell unpleasant from the heat and the dried African mud, but are you willing to wash them (as soon as we can find some water)? Jesus had just done that for the disciples, literally, when he told them what to do: “Love one another.” Christ called it a new commandment.

What an amazing thought! That the King of the Universe – the infinite Creator of all that is – would seek to have such closeness with us that He would become the “love fuel” that we need. We love because we’ve been loved (John 15:12).

What prevents me from loving as I ought? Most notably, me.

C.S. Lewis (in Mere Christianity) diagnosed our love-problem like this: “A proud man is always looking down on things and people: and, of course, as long as you are looking down, you cannot see something that is above you. That raises a terrible question. How is it that people who are quite obviously eaten up with Pride can say they believe in God and appear to themselves very religious? I am afraid it means they are worshipping an imaginary God … I suppose it was of those people Christ was thinking when He said that some would preach about Him and cast out devils in His name, only to be told at the end of the world that He had never known them.”

Life on the mission field does one thing well. It urges us to swallow our pride. Will you swallow yours with me, friend?

Then maybe we can look up. After all, the Kabaka is coming!