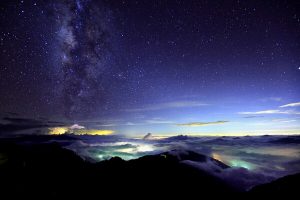 I’m no scientist, but I love astronomy. I can get lost in a technical conversation on the subject, but never before being humbled again by the enormity and grandeur of Creation.

Now experts are telling us that it’s even bigger than we’ve ever imagined. The latest estimates are that the distance across the Milky Way galaxy is at least 170,000 light-years. Some put it as high as 200,000 light-years. Now, that might be a number so large that it means nothing to you, but try this on for size: start driving at 60 miles per hour, and it will take you two trillion years to make that journey. 2,000,000,000,000! Not including fuel stops, of course.

A friend recently gave me The Science of God by Gerald L. Schroeder. Dr. Schroeder is an Orthodox Jew, and an acclaimed professor of astrophysics. Educated at MIT, Schroeder currently teaches at the Aish HaTorah College of Jewish Studies in Jerusalem. I’ll share just one quote for now: “While a creation to the universe does not prove that God created the universe, it opens the door quite widely for that possibility. NASA, on the other hand, which has calculated an age to the universe, that is, it accepts the fact of the creation, posits that the creation was the result of a quantum fluctuation. NASA has assumed in this that the laws of nature (not nature but the laws of nature) are eternal. Within the laws of nature is the possibility that an aspect of those laws, a quantum fluctuation, could in theory have produced the universe from absolute nothing. All we need is eternal laws of nature. This almost sounds like God!”

Our galaxy is shaped like a disk with a bulge in the middle. Scientist friends, please forgive my naïve description. Earth is in the disc, but we’re closer to the edge than to the center. The disk has spiral arms, but we can’t really see those – because we’re in those. So our view is more of a faint cloud band stretching across our summer sky (for those of us in the northern hemisphere). Thus, “Milky Way” is a very good name.

The observable universe contains some 300 sextillion stars. (I won’t even include the digits for that one.) And we humans, though unique reflectors of our Creator’s divine glory, occupy the tiniest fraction of real estate. Even our entire planet is a drop in the ocean of space. Remember that next time you’re tempted to get too worked up about the midterm elections.

And this is that glorious time of year: summer is knocking on our door. Get out. Turn off your cell phone. Breathe. Be still. Look up. Enjoy. Worship!

4 comments on “For Spacious Skies”