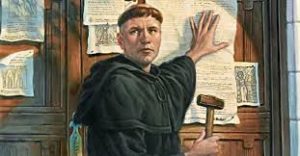 This is the day, friends! On this date in 1517, Martin Luther nailed his 95 Theses to the door of the Wittenberg Castle Church in Germany. What happened after that changed the course of world history. 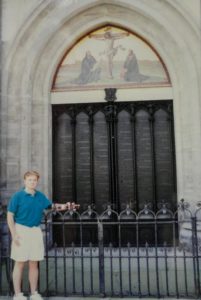 Before the fires of what we now call the Protestant Reformation were lit, the 16th-century church service was a mindless ritual and a lethal burden. Perhaps one could gain from the Mass just a little more grace – at least that was the hope of the blind parishioner – but the sad truth is that there was no saving gospel at the core of the priest’s ontological hijinks. You’ve heard me say it before, and I’ll say it again. There really are only two religions in the world: the undeserved grace of Jesus Christ, and some version of “I must save myself” works. Every world religion, every cult, and every pseudo-religious philosophy – apart from the gospel – falls into the latter category of deadly poison.

The Reformation recovered the truth: fallen sinners are saved by grace alone through faith alone in Christ alone. Hallelujah! Other Reformers would carry the ball – and the light – forward, but we must credit Luther with sparking the movement. Luther and the Reformation paved the way for us to enjoy the religious freedom which we now experience. May we never take that for granted!

Travel with me now to London. Over 200 years later, on May 24, 1738, John Wesley “went very unwillingly to a society in Aldersgate Street, where one was reading Luther’s preface to the Epistle to the Romans.” I stood on that very spot for the first time in 1988, but in 1738 Wesley felt his heart “strangely warmed” then and there. He was marked by the love of God like never before. Not long after, Wesley met with his Anglican community to pray and worship on New Year’s Eve, when “the power of God came mightily” upon them. This gathering of hearts in Christ, and around Christ’s glorious gospel, became the catalytic flame which would ignite the Great Awakening! It would be this warm-hearted evangelical faith which would shape substantially our American history. 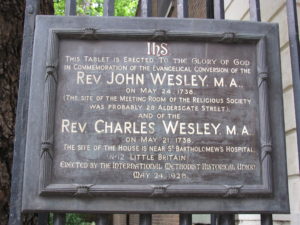 In fact, the Protestant Reformation would propel a gospel awakening that would invade Europe, and overflow to the Americas and beyond. Our Sovereign God would propel His Word from the pulpits and pens of a Bible-rejuvenated church. Believers became passionate Christ-followers, and courageous compassion would become the mission of the true church into our own lifetime.

Today, I want to jumpstart your thinking about how many different and amazing blessings have come to us because of the Reformation …

We can understand what the church really is. There is no special class of sainthood or priesthood, for the ground at Golgotha is level. All have sinned and fall short. But we have an adequate and wonderful Savior! Every believer matters and is gifted for ministry. We’re all ambassadors of grace. We’re all missionaries. Christ’s enterprise of evangelism and missions is our calling and delight. There is an urgency about our calling which is as compelling now as it was in 1517.

People need the Scriptures in their own language. The Bible is not meant to be a closed book enjoyed only by a select few scholars. With the Reformation came widespread literacy. I don’t have to tell you what that accomplished for Western Civilization. And people need education. With the Bible’s being translated into vernacular languages, literature, in general, became accessible. With the Bible’s prominence at the center of church life came the modern concept of public learning. The Renaissance sparked interest in the natural world, but the Reformation told the truth about the God who created it all – and the cultural mandate which is ours in Christ to steward it all for God’s glory.

We, as God’s people, can celebrate all of God’s world! The Reformation transformed literature, science, and even art. Because the gospel became known and understood, it also became understood that an artist can paint a sunset as unto the Lord. All beauty is a reflection of the divine nature. There is no “secular” and “sacred” distinction. We’re losing this truth today, and I’m hoping that my blog posting will matter to you and to your children. Whether your kid wants to dress up tonight as a farmer or an astronaut, I hope you’ll tell that precious child that he or she can become that farmer or astronaut – and that it will be the world’s holiest vocation.

Just a couple more thoughts before I let you go, please. Here in the USA, our constitutional republic and democratic government flow directly from the Reformation. They’re based on the idea that every human being is God’s image-bearer, and that every person possesses inherent worth, dignity, and value. I think we can discern from history that there really is no lasting freedom without Christ. What we consider our “inalienable rights” didn’t just happen, but they came from a high view of the Bible. At the same time, if we understand the truth about people, we will concern ourselves with justice. Let’s not allow our country’s polarizing political climate to persuade us that evangelical faith is antithetical to social justice. Evangelicals have fought to abolish slavery, reform jails, improve working conditions, and protect the rights of the poor and oppressed. That’s because evangelicals understand that it’s all God’s world, and that its all under Christ’s rule – and all under God’s common grace.

These are the hallmarks of classic and authentic Protestantism, friends. This is our marvelous heritage. So, Happy Reformation Day!