I’ve been in and out of hospitals a lot recently. No fun. Sadness galore. Sometimes there’s no spiritualizing away the harsh realities of our lives.

In fact we shouldn’t. We should experience our sadnesses for what they are, knowing that God is sovereign over them. But that doesn’t make them unsad.

Speaking of hospitals, I just read of Robert and Ellen Hughes. Robert and Ellen had to drive their 33-year-old autistic son, Walker, to Loyola Medical Center in Chicagoland. Walker was in a fit of rage, and he sat in the back seat pulling his mother’s hair and attempting to strangle her. The much-loved son was having a terrible reaction to a medicine which was supposed to calm him down. Walker even bit his dad.

Not really a Hallmark moment. Maybe you can relate on some level.

Our Lord Jesus said something very interesting (John 12:24): “Truly, truly, I say to you, unless a grain of wheat falls into the earth and dies, it remains alone; but if it dies it bears much fruit.”

Interesting indeed. I think I get it, at least in part: my pathway to life is through death. God desires that I bear spiritual fruit, but I have to get there by dying.

Jesus was talking about His own cross. He is that grain of wheat. He would give His life as a ransom for us. He, by His death, would bring us to glory. Only He could do that.

But, in another sense, Christ was setting an example for us. His ministry on earth would be short, but it would mean constantly dying to Himself as He loved others. Kind of like the foot washing experience among the disciples. The culmination of Christ’s dying would be the cross, but He would die all along the way in order to get there.

The same is true of us. As you and I die to ourselves – all along our way to glory – we find ourselves reproducing the Spirit of Jesus. That’s fruit. As we serve others instead of ourselves, Christ is glorified. Way cool.

Now back to our friends in Chicago. Just as they reached Loyola, Walker bit his mom. She let out a yell, and uniformed men surrounded the family in an instant. They were public safety officers with stun guns attempting to subdue a large and violent man. Walker’s exhausted parents had witnessed these kinds of scenes before, unfortunately, and usually they did not end well.

Ellen was sadder than she’d ever been in her entire life. Can you relate, at all? 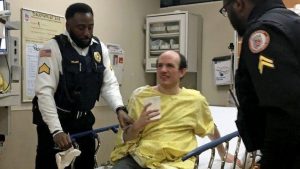 That’s when things turned on a dime. Instead of a fight, the officers creatively lured Walker into a game. At first he jumped off the exam table, but then – for three amazing hours – the officers cheered and clapped for Walker until he was lulled into a completely different state of mind. These men, in their bulletproof vests, sang songs. They harmonized the theme of “Mister Rogers,” and grooved to some James Brown. They impersonated characters from Sesame Street. And they danced until Walker – who has great difficulty communicating – was completely calm. All because one of the men, Sgt. Keith Miller, picked up on an important clue: Walker mentioned Mary Poppins.

I’ll give you a quote from Walker’s mom: “Walker loved it. He was kind of mystified and charmed and started smiling.”

Sometimes, for life to flourish, you and I have to be set aside – just like those tough-turned-tender officers. May God grant us the grace to set ourselves aside! Daily. It will not be easy, but this is our tremendous privilege in Christ.

Regardless of what type of plant we have in mind, the seed must fall off of that plant and die before it can produce any more seeds. Though it may be necessary for the seed to be on the tree for a time, sooner or later it must die. Its death means, in reality, more life. Same with ours.

Some days, you and I are hurting. And, every day, there’s someone hurting nearby. The way to life, for all of us, is dying to ourselves. As Ellen thought about what had just happened to her son that cold winter night, she expressed her profound gratitude on social media: “They were men his size who considered him a real person. It’s scary when people don’t think you’re a real person.”

I’ll close with one more of Ellen’s descriptions of those kind and selfless men: “You can’t train that kind of spirit.”

3 comments on “Dying to Live”