“Come before winter.” Paul issued that special and specific request to the young preacher Timothy (Second Timothy 4:21). As he neared the end of his life, the apostle longed for the grace-giving companionship that only two Christian believers can share.

This morning after school drop-off I heard on the radio that snow is in our forecast. Yes, snow. By the time that you read this, the frozen precipitation may or may not have transpired, but the trend is clear. As the days shorten, and the sun hangs lower in the sky, and the temperatures trickle downward, winter is on its way.

I suppose that my embrace of a rather obvious reality may be causing me to notice more carefully the brilliance of autumn. Within the last few days I’ve been more than once left almost breathless by a few of the local vistas. In turning just about any corner around here, one is likely to catch at least a brief glimpse of the colorful canvass that has been magnificently spread before us by the Artist of the universe. 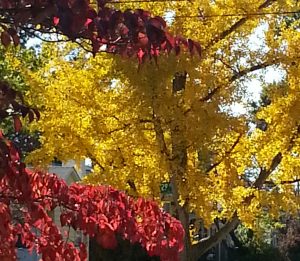 Here’s a scene that I just captured within a stone’s throw of the church, as the afternoon sun seemed to illuminate every leaf with LED intensity. The experts say we’re chronologically “post-peak”, but I’d say that’s a matter of opinion. My photo strongly suggests otherwise.

In the greatest sermon ever preached, our Lord Jesus instructed us to seek the kingdom of God today (Matthew 6:25-34). To seek Christ’s kingdom first. Our tendency is to worry about everything we think we’ll need tomorrow. But God is the only one who sees tomorrow, and He’s already there. Tomorrow is held tightly in the very best of hands. Christ has promised never to leave us or forsake us. He’ll take care of us tomorrow just as He’s taking care of us today.

So stop worrying about food or clothes or snow … or tomorrow. Rejoice in Christ today! Gorgeous evidences of His abundant grace are all around you.

Just look up, and come before winter.

3 comments on “Come Before Winter”