Sunday afternoon was a bit unnerving for many of us. My cell phone sounded from the lunch table its version of a siren, and warned via text message: “Tornado Warning. Take shelter now.” Unquote.

I know that our God is “a refuge and a shelter from the storm” (Isaiah 4:6), but I was tempted toward a bit of anxiety just like most of you. As it turned out, there was reason for concern. Some in our area lost loved ones and homes in a tornadic outbreak that pummeled the Midwest and Upper South, disrupting lives and routines and even pro football from Soldier Field to points well south of here.

In May of this year, wind, humidity, and rainfall mixed precisely to create the massive killer tornado that struck Moore, Oklahoma. The incredible amount of energy released over that small city dwarfed the power of an atomic bomb. The National Weather Service gave the Moore tornado the top-of-the-scale rating of EF-5 for wind speed and breadth and severity of damage. Wind speeds were estimated at between 200 and 210 miles per hour. Several meteorologists used real time measurements to calculate the energy released during the storm’s near one-hour life span. Their estimates ranged from eight times to more than 600 times the power of the bomb that leveled Hiroshima, Japan – with more experts weighing in on the higher end.

It can happen. When conditions are right, there is clear and present danger.

Some 700 years before Christ’s birth, the prophet Isaiah described weather extremes much like what we just witnessed Sunday to make a striking point: God’s people can, and will, know the Lord’s abiding presence even in the midst of the most humanly uncontrollable circumstances that Planet Earth can hurl in our direction.

The Canadian-American theologian Harry Ironside (1876-1951) commented on this verse: “Like Israel in the wilderness so long ago, will the restored nation be under the Lord’s gracious care when He has cleansed them from their iniquities and turned their hearts back to Himself.” Centuries before, the English pastor John Gill (1697-1771) had worded it like this: “Christ is a refuge for sensible sinners to flee unto for safety, from avenging justice, and the wrath of God; so He is a place of security, and has His chambers of safety for saints, from all dangers, and from every enemy.”

In Psalm 61:3, the psalmist David cries out to God as his “refuge” and his “strong tower against the enemy.” The noun and verb forms of “refuge” in that verse occur multiple times in the Psalms, and connote ideas of protection and stronghold. “God is our refuge and strength, a very present help in trouble” (Psalm 46:1). There the noun means “shelter” or “place of protection.”

When the Bible speaks of a “refuge,” it is often within the context of some very real danger – there is something about the world that is a concrete threat to us. There is danger everywhere, and brokenness everywhere we look. Especially in the mirror. The idea of “refuge” calls us to consider the reality of sin. Sin in general, and particular sin in us. And the damage caused by sin, in others and in us. Damage that marks every corner of this fallen world, and every corner of my own heart.

In that sense, the fury of a tornado can be a monumental blessing. It reminds us that all is not well here. This isn’t forever home. We’re still aliens and strangers in this place, longing for our Promised Land where destructive winds will never blow.

The path of the Moore tornado was 1.3 miles wide and 17 miles long. That level of intensity and ferocity may be rare, but it’s not unknown. Sometimes the power that God has built into weather systems leaves us humbled before His majesty and glory. In The Battle Hymn of the Republic, we sing these words: “He hath loosed the fateful lightning of His terrible swift sword.” This is a reference to the Book of Revelation, where lightning is mentioned twice (11:9; 16:18), each time accompanying God’s holy wrath and judgment. We would be foolish and sinfully presumptuous to connect specific destructive meteorological events today (or any other tragedy, for that matter) with God’s judgment. But we would be wise in the aftermath of any storm to praise the God who is sovereign over the wind (Matthew 18:27). And to bow before Him in awe and wonder. 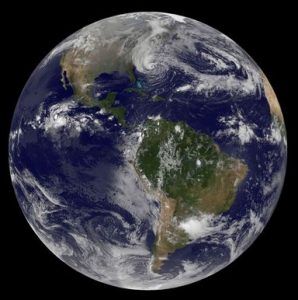 Let’s pray for our friends and neighbors who suffered loss because of Sunday’s tornadoes. Let’s reach out to them with love and food and supplies and hope. (Pastor Russ sent you an Email regarding FBCP’s efforts in this regard. You can bring supplies to our church.)

Everywhere we look, the dangers are real. But Christ Jesus is our hope of eternal refuge! Hallelujah!

2 comments on “Clear and Present Danger”