You can learn a lot from a baseball game.

Almost five hours after the start of Game 5 of the National League Division Series, the Chicago Cubs made good on manager Joe Maddon’s summer declaration to “Bring on the Dodgers!” Aided by some eighth-inning help from the Washington Nationals, the Cubbies held on tight for a 9-8 victory. They now advance to their third straight NL Championship Series against the Dodgers which begins this Saturday night in Los Angeles. 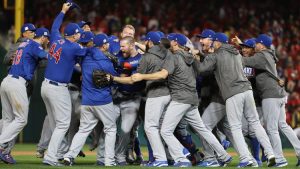 This morning some are calling last night’s game a wacky one. Indeed. The excitement surfaced in the second when the usually dependable Kyle Hendricks allowed a game-tying home run to Cubs playoff villain Daniel Murphy, and it continued when Michael Taylor cranked a three-run homer on an 0-2 pitch. But the Cubs pressed on. They chipped away at inconsistent left-handed starter Gio Gonzalez, who escaped with allowing only one run during a 26-pitch first but allowed the Cubs to cut their deficit to one after three innings. That set the stage for last night’s remarkable breakthrough. By now you probably know the rest of the story.

Maybe you need a breakthrough today. Now that Josh has his heart and plans set on a military career (we had no idea when we named him after General Joshua), I’m thinking in those categories more than ever. Only when an army is able to weaken its enemy to the point of collapse is a breakthrough a reality. Then, and only then, can enemy territory be invaded and taken.

For we do not wrestle against flesh and blood, but against the rulers, against the authorities, against the cosmic powers over this present darkness, against the spiritual forces of evil in the heavenly places. Therefore take up the whole armor of God, that you may be able to withstand in the evil day, and having done all, to stand firm.

This much I can assure you: wherever you are right now – and no matter how weakened you may feel – you’re in the most strategic location possible when it comes to a breakthrough. That’s because you’re exactly where the Lord has placed you for this moment in time! And if you’re there, sister or brother, there’s a strong army stationed all around you. There may be plenty of enemy forces to frighten you, but I can tell you that there are more formidable forces being dispatched to defend you. The army of an excellent general most ferociously protects that which the general most highly prizes. We have such a General. His name is Jesus.

Do you and I face intense opposition today? You bet we do. And increasingly intense fighting nearly always precedes strategic breakthroughs. The ground which we’re seeking to gain is not given up easily. But Christ has won! By faith we’re now watching His glory triumph “on earth as it is in heaven.”

Christ’s Church is on the march! This is not the time, either personally or collectively, for us to circle the wagons. We’ve been commissioned to go and make disciples of all nations, not to hold up in a holy huddle here at home. Our enemy may be a roaring lion, but we’re in the King’s army! There’s no place I’d rather be. I’ll take even a wacky victory if God is in it. How about you?

Joe Maddon began his coaching career in Major League Baseball with the California Angels in 1993. He’ll be making at least one more visit to the Golden State in 2017. Even lovable losers can be winners.

Breakthrough, friends. What’s yours? Pray for it! Wait for it! Go for it!