I thoroughly enjoyed my time at the annual meeting of the Southern Baptist Convention in Phoenix. I’ll share just one pic – which is downtown Phoenix (and the convention center where #SBC17 was held) just after take-off for the return trip. Shirley Barlow and Pat Rogers were on that flight to Chicago with me, and getting home ended up being more than an adventure – sometime I’ll tell 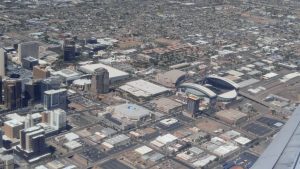 With a couple of minor exceptions, the desire for denominational unity was obvious. People want to serve Christ. They want to get along. They want not to divide over trivial differences. They recognize that this is not the moment in American history for the body of Christ to carelessly splinter over peripheral and non-gospel matters. They recognize the need for prayer and real spiritual power for such a time as this.

That being said, there was one particular statistic that robbed my joy: we are steadily declining in weekly worship attendance. Sadly, I must report, the Southern Baptist Convention has joined the mainline denominations in spiraling downward in terms of actual people present for corporate worship on a typical Sunday morning. I find that heartbreaking. I know you do as well.

What if you woke up tomorrow morning to learn that Bakersfield, California, had vanished? That’s about the same number of people who are nowhere to be found.

What if you were hit with the news that New Orleans had fallen into the Gulf of Mexico? Again, roughly the same number.

What if the people of Tampa just disappeared?

The writer to the Hebrews (10:25) warns against such spiritual passivity and neglect: not neglecting to meet together, as is the habit of some, but encouraging one another, and all the more as you see the Day drawing near.