“Our district is in a tremendous state of grief and sorrow. It is a horrible day for us.” Those were the words of Robert Runcie, superintendent of the school district in Parkland, Florida, where a former student – armed with a semiautomatic rifle – opened fire at the Marjory Stoneman Douglas High School as classes were ending yesterday afternoon. 17 are dead, including a beloved football coach who was attempting to shield students from the gunfire. Others are seriously wounded. No one will ever be the same.

The 19-year-old shooter, Nikolas Cruz, was taken into custody without incident. It was our nation’s deadliest school shooting since the 2012 attack at the Sandy Hook Elementary School in Newtown, Connecticut. This is starting to feel like an epidemic. Either that or a bad dream.

We’re still reliving the Marshall County shooting from our own backyard, and now we’re watching nonstop video footage of more students escaping into the streets as SWAT team members advance on their unsuspecting school. Apparently the shooter had a gas mask and smoke grenades when he set off a fire alarm to draw as many kids as possible into his firing range. Horrific. Just the sounds of bullets firing and kids screaming, captured on students’ cell phones, are enough to make you cry. 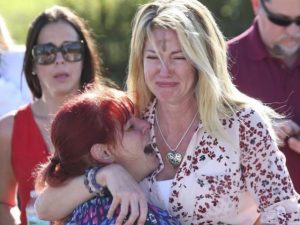 And the sadness permeates multiple levels of this story. We’re already learning that Cruz had lost both of his adoptive parents, was deeply troubled, and was left in the care of a family friend last November. That situation did not work out, and he moved in with a friend’s family in the area. Posts on social media have confirmed previous volatile behavior and disturbing threats on the part of this young man.

This morning, as you might imagine, nearly everyone with a public platform is aiming the attacks at political opponents. Again, I feel like I’m stuck in the movie Groundhog Day. You can almost predict everybody’s script, as well as everybody’s blame game. We know the playbook by now. But I am convinced that we rarely get the bottom of anything anymore, because we refuse to talk about sin. “The wages of sin is death” (Romans 6:23). That is an equal-opportunity indictment which owes no one political favors. America is seeing it up close.

Yesterday was Valentine’s Day. But, for the first time since 1945, Valentine’s Day was also Ash Wednesday. Historically, Ash Wednesday observances have emphasized two themes: our sinfulness before a holy God, and our human mortality. The prophet Daniel sought the Lord for the release of his people from Babylonian exile “with fasting and sackcloth and ashes” (Daniel 9:3). Later, in Jonah’s day, when the people of Nineveh repented, the king “arose from his throne, removed his robe, covered himself with sackcloth, and sat in ashes” (Jonah 3:6). Literally, in humility, that once-proud man sat down in the dust before our sovereign and mighty God.

Maybe we should sit before God and weep.

Like God told Adam, you and I are but dust, and to dust we shall return (Genesis 3:19). But, because of Christ, we know that a day is coming when God’s glory will again fill the earth (Habakkuk 2:14)! Gunfire will give way to peace (Isaiah 9:6; 11:6), and death will be no more (Revelation 21:4). We can barely imagine it now, clothed in these bodies of flesh, but soon we will be free from every reminder that Planet Earth is fallen.

I am so grateful that neither Ash Wednesday nor the season of Lent is the final word. The tomb is empty! “He is not here, for he has risen …” (Matthew 28:6). Sons of men and angels say, “Alleluia!”

3 comments on “Ashes to Ashes”