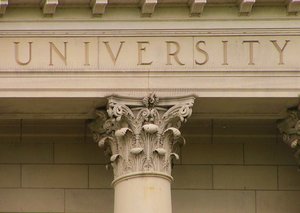 An academy is an institution of higher learning or research, and the word “academy” can be traced back to Plato’s school of philosophy. When I think of “the academy” in general, I think of distinguished authorities within a field of scholarship who determine helpful standards, and who prescribe appropriate methods, and who critique (in the healthiest way) the latest ideas within their field – all the while passing along the passionate pursuit of their subject matter to the next generation.

When it was time for me to choose a college, I chose the University of Kentucky. I wanted a public, large-campus academic setting where professors and students would come from multiple backgrounds and perspectives – and where the sky would be the limit in terms of academic majors and postgraduate degree programs as well. My university studies followed a liberal arts trajectory, with much of my coursework in Spanish and political science (my undergraduate major and minor, respectively). Since many of my courses were in the Patterson School of Diplomacy, I witnessed liberal and conservative professors working together for the common good. Within the broadly more liberal academic environment that typifies a state school, the Patterson School included its fair share of outspoken conservatives, whose voices were – from my perspective – welcome at the table of ideas that represented U.K. academics.

The vision for the Patterson School came originally from Dr. James Kennedy Patterson, U.K.’s first president. The 1898 Spanish-American War convinced Dr. Patterson that a new school was needed to prepare young adults for “the diplomatic and consular service of the United States.” Patterson used as his model the programs that he had observed at Harvard, Stanford, Chicago, Cornell, and Yale. And the Patterson School, during my tenure as a student at U.K., was a robust marketplace of scholarship and academic inquiry. Thus, that experience became my understanding of university education.

What I see today, at least from a distance, is drastically distinct from that. In my opinion, what is happening at the University of Missouri is symptomatic of a deeper cultural fissure that underlies and threatens the foundation of American life. Though I decry racism in all its manifestations, I fear that the Mizzou problem is not really about racism. I fear that it is – in the name of “tolerance” – actually the dismantling of tolerance. Have we raised a generation of young adults who can no longer tolerate an opinion other than their own? Is this the result of the drive for self-esteem, only on steroids? (Wasn’t self-esteem for everybody supposed to fix everything?) And are we not witnessing firsthand what happens when the pursuit of political correctness is allowed to trump every other virtue in a civilized society? What most concerns me about Mizzou is the climate that caused a university president to resign based on charges that were only that – charges. Why would he not wait confidently for sound reason, common sense, and the truth to prevail? My best guess is that he had little hope that the truth would prevail.

What most concerns me about the climate of “the academy” today is the systematic erosion of freedom of speech, which is in fact the death of the freedom of conscience. (On that same train will depart that old bothersome baggage of religious liberty as well.) How can academic administrators protect every student from hearing anything that said student does not want to hear? Is that even the administrator’s job? And, were it even possible to create such an academic environment, how would that prepare anyone for real life in a pluralistic society like our own?

We can enjoy no academic integrity unless we also have honesty and respect, along with large doses of personal responsibility. Having nearly abandoned all three, I am afraid that we have created our own monster. And it’s hard to run away from our own monster. The colorful New York City attorney, Hiram Mann, published these lines in The Wall Street Journal in 1947:

No man escapes when freedom fails,

The best ones rot in filthy jails;

While those who cried, “Appease, appease!”

Are hanged by men they tried to please.

And let me simply add this about the nature of truth itself: sometimes the truth hurts. Pontius Pilate didn’t like that fact either – we see that in his “What is truth?” (John 18:38) – but that didn’t change the fact that it was fact. You may remember that snarky Pilate, right before he delivered Jesus to be crucified, pulled that one out of his hat in an attempt to save his own hide. Pilate had been adept in his acquisition of the throne, and he would prove just as adept (under Rome’s watchful eye) at maintaining his power at all costs. Truth is: truth did not matter to Pilate. And Pilate understood that truth did not matter to Jesus’ accusers either – though they championed themselves as the guardians of truth.

But truth is still truth.

It is more than ironic that Pilate would ask the question “What is truth?” … while staring Truth itself right in the eye.

May we not do the same.