↓ Skip to Main Content
Home › Blog Posts › All This Time 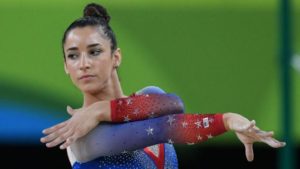 Three-time Olympic gold winner Aly Raisman is retiring, at the age of 25. The amazing gymnast will not compete in Tokyo, but she will be there to “cheer everyone on.”

You may remember that Rio was Raisman’s most spectacular international meet. That was in 2016.

From the time she was a little girl, Aly dreamed of becoming a gymnastics superstar. Tragically, she was victimized by former national team doctor, Larry Nassar. Nassar groomed Raisman and other promising athletes by presenting himself as a friendly ear. You’ve heard some of the horrific stories, and the amount of abuse that took place at Nassar’s hands is in fact staggering. The USA Gymnastics sex abuse scandal included assaults of at least 250 young women and girls, and one young man, dating back to 1992. If you want to know more of Aly’s story, you can check out her autobiography entitled Fierce: How Competing for Myself Changed Everything.

Upon announcing her retirement, Raisman gave few details about her plans, but she implied that her life’s work from here on would be an investment in others who’ve been sexually abused. I was glad to read those news reports. What might be considered a premature retirement for Aly just might become a whale of a blessing for many others who have lived in – or are living in – the darkness of abuse. I love it when God makes victims victors!

I know You’re for me
And You’re restoring

You’ve been walking with me

You and I don’t always understand life’s shadows. They’re scary and real. But the God who created us is able to restore every broken moment for the glory of Christ, and for our good. We don’t always know how He’s going to do that, but we take God at His word (Romans 8:28). After all, whether we realized it or not at each step along the way, our Lord has been walking with us all this time.

Sometimes in life, “going for the gold” takes on entirely new meaning. Go for it, Aly! May our Sovereign God use the darkest hours in your past to shine the light of freedom into the lives of many who need your example of resilience and hope.