A Time to Weep

Today I’ll take a break from my “Serve It Up” blog series.

rom the Greek “beyond” + “expectation”) is a figure of speech in which the latter part of a statement is unexpected. It’s a rhetorical term used to describe an unexpected shift in meaning. For example: “Nostalgia just isn’t what it used to be.” Sometimes these thought-shifts are intrinsically humorous, and you can see why comedians make much use of paraprosdokians (whether they’re familiar with the term or not) in their performances. Satire can be powerful. There is the surprise effect, and often an added double meaning for good measure.

But I’m not laughing today as I think about our brothers and sisters who are suffering in the aftermath of Wednesday’s horrific shooting at the Emanuel African Methodist Episcopal Church in Charleston, South Carolina. Quite tragically, the mass shooting resulted in nine deaths. I agree wholeheartedly with Charleston Mayor Joe Riley when he describes the midweek murders as “unfathomable and unspeakable.”

Each life mattered. Cynthia Hurd had worked for 31 years for the Charleston County Public Library. The library system closed all 16 of its branches Thursday and rightly honored Cynthia with these words: “Cynthia was a tireless servant of the community who spent her life helping residents, making sure they had every opportunity for an education and personal growth. Her loss is incomprehensible.”

Each of the other eight lives also represents profound sadness and grief for many families and many friends, and even for an entire community now trying to cope with such unexpected, instantaneous loss.

Friends, our world is broken. Only what the Bible says about sin, and its consequences, can explain weeks like this. A gunman walks into a church sanctuary and opens fire. 100 rounds of ammunition and a pipe bomb. Nowhere to run, and nowhere to hide. A calculated attack, and the worst attack on an assembled congregation in American history. Lord, dear Lord, have mercy.

At meetings earlier this week I saw again the famous 1993 photograph by Kevin Carter that won the Pulitzer Prize. The Sudanese girl and the vulture. That shot always haunts me. It reminds me of the wisdom expressed by Rebbetzin Heller of Neve Yerushalayim College in Jerusalem: “We avoid pictures from the Holocaust because we don’t want to cry. But only tears open all the gates of heaven.”

Our nation is splintered by political division, weakened by moral disintegration, and endangered by spiritual meltdown. We face threats from within and without. The gospel of Jesus Christ is our only hope. Please extend a hand of gospel friendship to someone who needs it. Please love as Jesus loved. 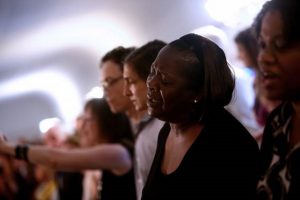 If I might share my own paraprosdokian before I close: Maybe we have to be torn apart to be glued together.

4 comments on “A Time to Weep”