A Crowd of Loneliness 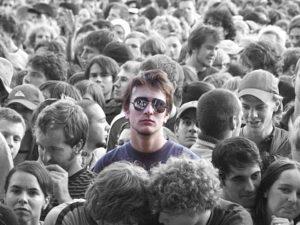 The older I get, the more I recognize the pervasive loneliness that resides within the souls of most people whom I meet. It’s not that they’re cut off from all human contact, but it’s actually worse than that. They’re alone even when others are around. There is little about their relationships that inspires or delights them. They can converse, but they’re still disconnected. It’s a loneliness that haunts them at the core of who they are, and a loneliness that occludes their vision of the world.

Since God created us for relationship, we know that loneliness is less than what we were made to experience. Sometimes we’re lonely because we’ve chosen to detach ourselves from other people (at least from any meaningful interaction with them) – and this is usually because we’ve been deeply hurt and don’t want to be hurt again. We mistakenly conclude that the secret to protecting ourselves from relational pain is to avoid the risk of entering into any real relationships. What we don’t realize when we do that, however, is that we’re self-inflicting a wound far deeper than the one we’re seeking to avoid.

Thankfully, the Bible offers a way out of our loneliness, and that’s an intimate, life-giving, heart-satisfying relationship with the living God!

As Matthew the tax collector turned gospel writer describes the birth of Jesus Christ, he records these words (1:22-23): “All this took place to fulfill what the Lord had spoken by the prophet: ‘Behold, the virgin shall conceive and bear a son, and they shall call his name Immanuel’ (which means, GOD WITH US).”

God with us. That’s the secret. If we really believe that, we can launch out into the sometimes scary waters of human relationships. Because we’re not alone. We’re never alone. So if a relationship doesn’t “work out” according to my assessment, I’m still not alone. The real “me” does not hinge upon the value placed on me by any other person, because my real value was settled at the cross.

Perhaps the “best part” of the first resurrection appearance of Jesus – recorded in John 20:17 – is Christ’s announcement that He was ascending “to my Father and your Father, to my God and your God.” Have you ever thought about that? Jesus is telling every Christian believer something marvelous there, namely, that we are children of God! Adopted into God’s own family, with all the rights and responsibilities that such entails.

As our Father’s adopted children, we know that our Father is in control. We fear him, but not in a terrorizing sense. Our fear of God is respect and awe. And nothing makes a child feel safer than knowing that he or she is secure in the care of a loving parent. Our closeness to God is the relational connection that becomes the impetus to pursue closeness with others. Yes, like Jesus, we will get hurt by others in this world – even by some of those we love. But we, also like Jesus, keep extending ourselves in gracious openness toward others. Because that’s who we are in Christ. And, since our soul is content in the unshakeable foundation of our love relationship with our Heavenly Father, we have a never-ending refuge when we need one (Psalm 46).

In Christ our God we find affection that’s true, fellowship that’s real, and self-identity based on fact instead of fiction. And from that place we can love others, because Jesus first loved us (First John 4:19).

So go out on a limb, and love. You were made to love. Loneliness, get lost! Love is here to stay.

4 comments on “A Crowd of Loneliness”