Eileen and I came home from Birmingham encouraged. Very encouraged! What I feared would be exceptionally controversial was not controversial at all, and our denomination did the right thing. It’s never easy to admit “sin in the camp,” but real freedom comes only when we tell the truth. And I’m happy to report to you that the Southern Baptist Convention voted overwhelmingly to take a strong stand against both sexual abuse and racism – not just in words but in substantive action. Today is a brighter day for a denomination experiencing steady numerical decline. Now our 52,000 churches and congregations have a path forward. 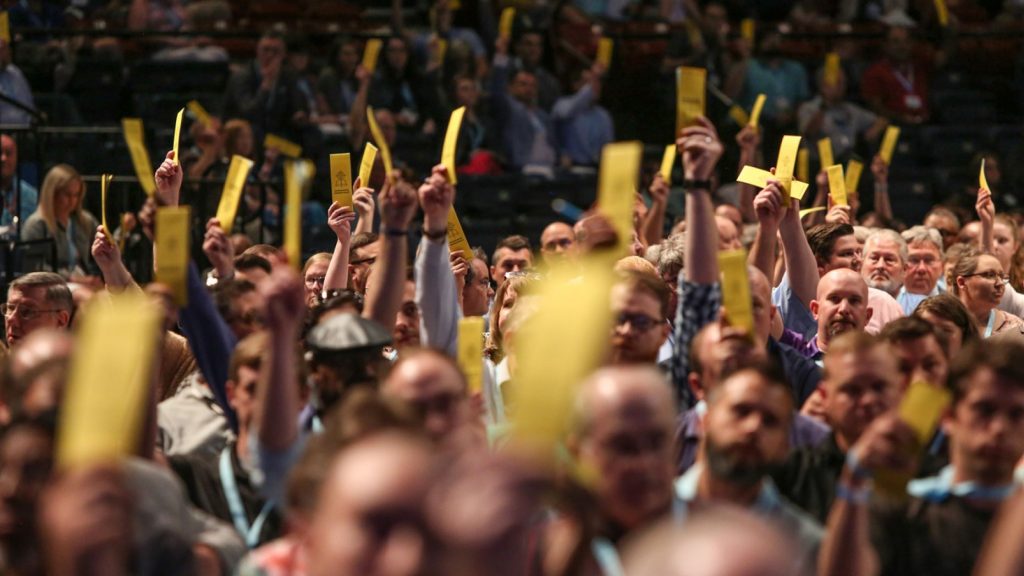 What you need to know is this: individual churches that mishandle or cover up claims of abuse will be removed from the SBC.

The “lawyer” in me must also inform you that these constitutional amendments must be ratified by a two-thirds vote next year in Orlando, but – based on the historical movement I just observed – I think that’s just a technicality at this point. I can remember, not too many years ago when the SBC annual meeting in Indianapolis was nearly tone deaf to the pleas of a woman who claimed former sexual abuse by SBC church leaders. Tone deaf no longer! By God’s grace and for His glory, we’ve come a long way. We must, like President J.D. Greear articulated so well at this year’s meeting, admit that the media actually did our convention a huge favor by “shining light on this evil.” Speaking to whom evangelicals often refer to as “the secular media,” Pastor J.D. said: “You are not our enemy.”

Monday I was invited to a late-night rollout of the Caring Well Challenge, which has been diligently put together with tremendous input from the Ethics and Religious Liberty Commission. It’s a local-church plan for training church leaders on the ground to prevent abuse. Eileen has agreed to lead First Baptist Paducah through this Challenge. Please stay tuned – this will involve nearly all of us at one point or another.

I’ll steal another of Greear’s lines: this was a “defining moment … a very, very significant moment in the history of the Southern Baptist Convention.” Indeed it was. Indeed it is.

What I most loved was how unifying and worshipful was the climate at the convention center. You could feel the palpable sorrow in the room. You could see the tears, and hear the pain. But you could also sense the beginning of healing. Real healing I pray.

Though I graduated from an SBC seminary, in my early ministry years I was extremely reluctant to get involved in the SBC. In my mind and heart, the convention represented needless infighting over trivial matters that had little or nothing to do with the gospel of Christ. I’m so hoping I’m being proven dead wrong.

So you can imagine how encouraged I was by this year’s annual meeting theme: Gospel Above All. Amen and amen! As the messengers elected the most diverse slate of leaders ever in its history – in terms of age, race, ethnicity, and even geography – it felt like I was watching critical history unfold. It felt like the annual theme was being lived out, as the common denominator among all those women and men was nothing or no one but Jesus.

Friends, who could have imagined that the Houston Chronicle might be used by the Lord to help usher in – for a huge swath of God’s people here and now – a brighter day?