When Non-God Is God 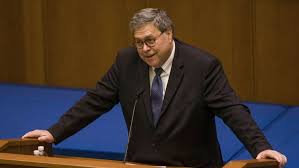 Last Friday, U.S. Attorney General William Barr addressed the Notre Dame Law School. I have a sneaky suspicion that this may go down in history as one of the most important speeches delivered in our lifetime. Barr’s address has been met with mixed reactions, as you might expect, so I invite you to read the entire transcript – which will be well worth your time (please don’t be dissuaded by the length):

If you are concerned about religious liberty in America – and you know by now how passionate Eileen and I are about this – then you’ll likely be greatly encouraged by Barr’s remarks. In extraordinary fashion, Mr. Barr traced the centrality of religious liberty from our nation’s founding onward. From James Madison, and a small group of colonial lawyers who described religious freedom as “a duty toward the Creator,” to the 21st century in which we live, Attorney General Barr set forth a rich history of American religious liberty – and a clarion call to preserve that liberty for the next generation.

Our Attorney General described how the American Experiment, and its magnificent charter of freedom – our United States Constitution – paved the way for more human progress than the world has ever known. This “quantum leap in liberty” has blessed not only our homeland but the rest of the world. Barr made it very clear that the Framers contended that “religion was indispensable to sustaining our free system of government.” He went on to describe how an assault against religious freedom, an attack that still threatens us, was launched in the 20th century.

I’ll leave you to read it on your own, but I simply want to highlight a few of the truths that jumped off the page as I read. Unless otherwise indicated, these are not quotes, but they are summations of the AG’s speech mingled with my own observations and conclusions.

Our government is to provide, for the benefit and blessing of its citizenry, opportunities for individual freedoms and free associations. We are not Communist China, where social trust and civil society have been largely dismantled, and where the people have no choice but to look to the government to meet every need. Our government was designed to promote self-government, in the sense that individuals must master their own passions out of a sense of moral courage, God-given reason (my grandmother used to call it “horse sense”), and personal responsibility. Without self-government, there is always tyranny.

This is perhaps the speech’s greatest strength. Barr drew a beeline between freedom and responsibility. Here’s the risk we’re running in America right now: “the unbridled pursuit of personal appetites at the expense of the common good.” Yes, we have unalienable rights enshrined in our earliest governing documents, but those freedoms can be sustained only by a people who are personally and deeply committed to an objective moral order and framework. Said differently, rampant secularism subtly but steadily erases the foundation for, and fabric of, real freedom.

Without some knowledge of God and His will, freedom fails. Created in God’s image, you and I are capable of good. But we are also capable of waging tremendous evil against one another. Barr says: “Men are subject to powerful passions and appetites, and, if unrestrained, are capable of ruthlessly riding roughshod over their neighbors and the community at large. No society can exist without some means for restraining individual rapacity.” This is the pernicious lie being swallowed hook, line, and sinker by our contemporaries: that, in order to thrive, we must rid ourselves of God. The lie of the Garden of Eden, in reality, enslaves.

By way of example. why are our nation’s public schools failing on so many levels, despite public funding at record levels? Because anti-traditional values have no value simply because they’re anti-traditional. Parents in Orange County, CA (our home before Paducah) can’t opt their kids out of LGBT training. This may feel like the state is winning, but the state is – in reality –unraveling. Because whenever values, which are in effect non-values, triumph, misery follows. So the state generally doubles down in its militancy. Meanwhile, the social and societal unraveling continues unabated.

AG Barr argued, quite convincingly, that we’re trying to live on “the vapor trails of Christianity.” Thus our new “values” are sentimental and sappy – unsustainable in the long run. “In the past, when societies are threatened by moral chaos, the overall social costs of licentiousness and irresponsible personal conduct become so high that society ultimately recoils and reevaluates the path that it is on. But today – in the face of all the increasing pathologies – instead of addressing the underlying cause, we have the State in the role of alleviator of bad consequences. We call on the State to mitigate the social costs of personal misconduct and irresponsibility.” You and I see this in the fight for abortion at all costs, and in every other failure of government to protect the defenseless.

Mr. Barr warned that America is not decaying, but that it is struggling to survive an “organized destruction.” People pretending to be morally neutral are not neutral at all, but all too often are promoting their own religion in education, media, and culture. It is a religion of no God, but it is its own God. And if one does not abide by every tenet of this new religion, he or she can expect an inquisition – and perhaps an excommunication. In our day, Twitter can create, and Twitter can destroy. For, where there is no room for God, there is no freedom. This, William Barr believes, is far from progress. From illegitimate births to drug overdoses, Barr offers example after example of our national destruction from within.

3 comments on “When Non-God Is God”