↓ Skip to Main Content
Home › Blog Posts › What Say You? 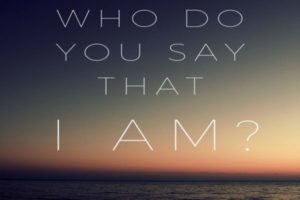 Sometimes it’s good to get back to the basics. Don’t you agree? In a world of trolls and clickbait, where hysteria happens as quickly as headlines, I find myself longing more and more for a firm foundation. Maybe you do too. Good news: we have one!

The scene was Caesarea Philippi (Matthew 16:13-20; in order to get the most out of today’s blog posting, please read this passage carefully). In a critical conversation that was transpiring among Jesus and His disciples, our Lord posed the million-dollar question: “Who do you say that I am?”

When Simon Peter declares, “You are the Christ, the Son of the living God,” those ten words become a total game-changer. This is the first and only confession of Jesus as “the Christ” in this Gospel account. Friends, I would humbly submit that this is the foundation for which you and I are searching. In fact, four of these ten words are definite articles in the original language.

Christ is the One.

“Christ” is simply the Greek rendering of the Hebrew word “Messiah.” Does the absolute uniqueness and exclusivity of Jesus still matter? I think it matters immensely and immeasurably, and here’s why: the moment for us to GET JESUS RIGHT is NOW. Right now!

I want you to consider another passage: 2 Thessalonians 2:1-12. Though his authority will eventually be ended, Antichrist will rule for a season of time. Only the Holy Spirit is presently restraining Satan from orchestrating this. I believe that evil is held back by the influence of the church on the culture, via human governments, and through other divinely empowered means which we can’t often perceive. But the day is coming when all restraint will be lifted. This “lawless one” will use fake signs and faux miracles to deceive everyone who does not know CHRIST.

If we don’t get Jesus right, we will be “shaken in mind” by the affairs of this world – just as Paul warns. So, back to Matthew, “Who do you say that I am?” becomes the most important question we’ll ever answer.

Every major religion, as well as every significant cultic group, rejects the deity of Jesus Christ. Some of these objections are the result of rationalism: “reason” is supreme, not God or God’s Word. Others have simply never been taught the Scriptures. A common objection results from revisionist history, which claims that Christ’s deity was invented at the Council of Nicaea in the 4th Century. But you and I must never forget that, if we deny the deity of Jesus, then we do not know God as Father (1 John 2:23).

Christ is “the Son of the living God!” It’s not just His office or His role that makes Jesus unique – it’s His very nature and being! It’s neither postmodern nor politically correct to declare these things so unequivocally, but we do so today because they’re true. These are just the facts, y’all. Just the facts.

Peter is not Lord. Christ is! “Upon this rock I will build my church,” declares Jesus. What’s the rock? Well, it’s not Philip the Tetrarch’s rock, though that is a nice backdrop for this lesson. Roman Catholics use this passage to defend the Papacy and in fact claim Peter as their first Pope. But all you have to do is jump ahead to Verse 23 (please do!) to discover one of many problems with that. Some Protestants claim that Peter’s faith is the rock, but I’d say that has its own problems too. I think the best answer is that Jesus is using a pun – a play on words – centered on Simon’s nickname (“Rock”).

Some people get really technical and claim that, because there are two different words for “rock” in this story, it must mean that Peter is a small stone – but Christ is “the Rock” on which the church is founded. Could be, but I’m sticking with this: Jesus is creatively communicating – with these men whom He deeply loves, and whom He wants never to forget this lesson – that Christ is establishing His church on the apostles and the gospel truth which He will leave with them (Jude 3). After all, without the correct knowledge of Jesus, there is no church.

The Hero isn’t Peter. Or us. Just Jesus.

A sovereign is a ruler, a king, and a lord. Period. Holy Scripture refers repeatedly to God as the one who rules over all. God’s most common proper name, “Yahweh,” is regularly translated “Lord” in the English Bible. “Lord” in turn is found over 7000 times in the Bible as a name of God – and specifically as a name and a title of Jesus. (Sidebar: soak in the glory of Exodus 3:13-15, and consider that great text in the light of Peter’s confession of faith.)

This is the conversation where Jesus promises that the church can’t and won’t be stopped! Why? Because we’re Christ’s Church! As a spiritual community being crafted for God’s glory, we are His called-out body of believers. Not even “the gates of hell” will overcome the church, and “gates” here is all-encompassing figurative language meant to wrap in every power and force of Satan.

“I will give you the keys of the kingdom of heaven.” Imagine that! What love is that! Jesus brings us into His plan of salvation. We become the instruments through which He shares the good news of Christ to the ends of the earth!

How do we know that they’re not just Peter’s keys? Because every Christ-follower is a fisher of men (and women). Every disciple is an ambassador of reconciliation. It’s humbling, but powerful, when we grasp that.

I believe that Jesus wants us to experience, and live in, such well-grounded amazement at His absolute authority over everything that we will give our lives to His seemingly impossible mission. May we hear His irresistibly gracious voice today, and respond with our whole being – willing to leave behind all security and comfort to expand the fame of the matchless Lord Jesus Christ!

Carefully consider what Jesus further explains in Luke 11:52. The religious leaders were not content leaving the power to save in the hands of God, and the “lawyers” were adding so much tradition to God’s Word that they were making it impossible for people to find any saving truth at all.

Do you and I receive eternal life as the “reward” of our discipleship? Yes, but this promise should not be the only reason that we follow hard after Christ. There is an amazing story linked to the phrase, “I have decided to follow Jesus.” A believer and his family from Assam, India, were living in direct opposition to the chief of their very violent tribe. They were threatened with their lives unless they denounced their faith. Eventually, the chief killed the man’s two sons right in front of him. Then his wife. But the family’s faith was resolute – they would not forsake Christ. Ultimately, all were killed. But, after the bloodshed, the chief was so shaken by the power of Christ that he and his entire village repented and converted.

“Christ is enough for me.” We sing it, but do we mean it?

He is our Prophet, our Priest, and our King. So, we affirm with David: “The Lord is my Shepherd. I shall not want.”

In Mere Christianity, C.S. Lewis writes: “Imagine yourself as a living house. God comes in to rebuild that house. At first, perhaps, you can understand what He is doing. He is getting the drains right and stopping the leaks in the roof and so on; you knew that those jobs needed doing and so you are not surprised. But presently He starts knocking the house about in a way that hurts abominably and does not seem to make any sense. What on earth is He up to? The explanation is that He is building quite a different house from the one you thought of – throwing out a new wing here, putting on an extra floor there, running up towers, making courtyards. You thought you were being made into a decent little cottage: but He is building a palace. He intends to come and live in it Himself.”

Christ’s righteousness is already ours. His gift of faith is ours. And even His resurrection will be ours!

Posted on July 2, 2020 by Charles Moore
No Comments