The Yesterday that Doomed Today 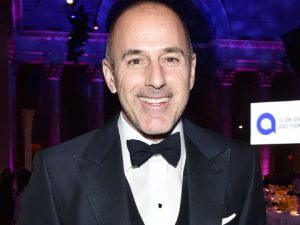 Not too long ago I took up this topic in a blog posting, but I have to revisit it in light of even more recent developments in our contemporary culture.

Today and NBC News have said goodbye to Matt Lauer. For two decades a consistent presence and even wider influence in American homes and businesses, Lauer was the boy next door. Even if you didn’t agree with all of his politics, he was likeable, humorous, and even a bit self-deprecating. At least on screen. Most of us can hang out over morning coffee with someone willing to be a goof-off from time to time, and that was the secret to the show’s success. And what’s more red, white, and blue than the Macy’s Thanksgiving Day Parade co-hosted by Matt?

What appears to have transpired, though you and I will never know all of the details, is that for years Lauer has been sexually harassing multiple female employees. When the patriarch behaves like this, even if he’s the patriarch of a television show, people are disappointed, disillusioned, and – in the cases of these women – damaged. The damage is physical, emotional, and spiritual.

America seems to be drowning in a sea of systematic sexual sin. I plan to take up this subject, at least briefly, Sunday morning. Yes, I know it’s the Christmas season, but didn’t Christ come to set us free from the sins which imprison all of us? If that’s true – and it is – then every season is gospel season.

Last Sunday, even before the Lauer story broke, The New York Times published “The Unexamined Brutality of the Male Libido” by Stephen Marche. I’d like to share a quote from that piece: “Through sheer bulk, the string of revelations about men from Bill Cosby to Roger Ailes to Harvey Weinstein to Louis C.K. to Al Franken and, this week, to Charlie Rose and John Lasseter, have forced men to confront what they hate to think about most: the nature of men in general.”

Isn’t that interesting? Mr. Marche has concluded that, at the heart of our current social conundrum lies “the often ugly and dangerous nature of the male libido” and “the implicit brutality of male sexuality.” We as Christians know that gender is not the real problem as much as humanness is. But it’s hard to deny that a string of powerful men has done more than enough, in terms of bad behavior, to validate the dark side of basic human nature – and to get people thinking about these issues like never before. Today’s revelations illustrate rather thoroughly what the Apostle Paul explained in First Corinthians 15:22 when he said that “in Adam all die.” That’s not a gender claim, but a universal claim.

Where are we, as God’s people, in all of this? For starters, I hope that we’re not pointing fingers. There’s plenty of blame to go around, and this era of American history should humble all of us – not swell us with pride. As I tweeted last night, “every one of us is inhabited by the depraved monster of self, and by the smug self-deception of a Pharisee.” This is a time for humility.

When Christ was born – when God took on flesh so that He could walk this earth and go all the way to the cross for us – the world was relentlessly wicked. In the Roman world, powerful men exploited everybody – sexually and otherwise. Women were deemed of little or no value. Freeborn men took wives in order to secure legal heirs, but everybody knew that they would find sexual pleasure anytime and anywhere – and with anyone – they desired: from prostitutes to their own slaves to helpless little boys. No sexual behavior was considered immoral or off-limits.

Being on “the right side of history” is way overrated. I’d rather change history. For God’s glory, let’s change things now. What say you?

Today may be done. Who knows? But I want to remind you of the rest of Paul’s amazing verse: “For as in Adam all die, so also in Christ shall all be made alive!” There is hope for our rottenness, and that of both the male and female varieties. His name is Jesus. He is risen from the dead. He forgives sin. His grace is enough for this season of chaos and crisis. And His grace is enough for eternity.

5 comments on “The Yesterday that Doomed Today”