The Unintended Complexities of Shenandoah Cuisine 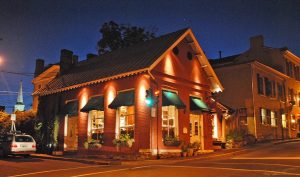 The Red Hen is supposed to be a quaint little farm-to-table spot nearly 200 miles from D.C., but now it’s the center of controversy. Friday evening at about 8:00, White House Press Secretary Sarah Sanders was asked to leave this Lexington, Virginia, restaurant because of President Trump’s policies. She offered to pay for her appetizers, and complied. She then tweeted about the experience.

Stephanie Wilkinson, who co-owns the restaurant, told The Washington Post that several gay employees at the Red Hen were bothered by Trump’s intentions to ban transgender people from military service. Apparently the employees asked Wilkinson to ask Sanders to leave.

In my opinion, we – as an American civilization – are entering into murky waters. We may have been lulled into thinking that this type of political climate is our new normal, but I contend that it is dangerous. Dangerous indeed.

Equality. Equal protection in the eyes of the law. American value and virtue.

Civility. Basic politeness when it comes to public behavior and speech. American value and virtue.

But personal destruction, trial by social media, and one-upsmanship until my political “enemy” is dehumanized.

We’ve got to dial back some of this stuff, folks. To disagree with someone does not make the one who disagrees evil. Proverbs 18:17, for goodness’ sake.

Do we really want to live in a nation where we have to think about where we eat dinner when we visit our nation’s capital? Hasn’t Virginia, in particular, seen enough of that over the years?

When you and I talk about the law of God (or the laws of our land, which we believe are ultimately rooted in the law of God) without demonstrating the love of God, we’re more like the people who killed Jesus than the people who follow Him. We who have received grace ought to show grace. It’s that simple. That’s the lesson for the “conservatives” among us.

Now here’s a lesson for the “liberals” among us: Please be liberal. Favor liberty over coercion. This is the Biblical and American vision: Now the Lord is the Spirit, and where the Spirit of the Lord is, there is freedom (Second Corinthians 3:17).

And the lesson for all of us is this: BE KIND. That’s it! Be kind. “Do unto others as you would have them do unto you.”

Perhaps the last eleven words of one of our childhood tales were packed with a double entendre: “And the little red hen ate the bread all by herself.”

7 comments on “The Unintended Complexities of Shenandoah Cuisine”