The Man with the Dragon Tattoo

Martina Navratilova and Chris Evert are friends. At least off the tennis court.

Friendship is a really cool thing. Our world needs more of it.

I want you to meet Brandon. Brandon has cut my hair for the last five years, and a little longer. He also cuts Joshua’s hair. At least once a month you can catch us hanging out at the Chroma Salon. 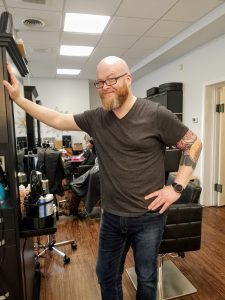 Brandon and I don’t share everything in common. We didn’t grow up in the same place. We didn’t attend the same schools, and Brandon is half a generation younger than I if we had. I don’t even have a small tattoo. Brandon and I don’t usually align with the same political party. But we really enjoy talking politics and many other subjects, and we often agree on the most important issues. And we laugh a lot – at each other, with each other, and at ourselves. Even when we might not agree on some detail, we’re still friends.

Brandon has the unique ability to enter into your world. Josh loves Star Wars, for example, and Brandon can go there in conversation with Josh in ways that leave me speechless. I can’t even keep up with all the characters! Brandon knows how to speak Josh’s love language, and – from the perspective of Josh’s dad – that is worth a million dollars.

C.S. Lewis and J.R.R. Tolkien were two of the most prolific writers of faith and fiction in the twentieth century. But they were great friends first, and rich influencers in each other’s spiritual lives. Both men served as soldiers in World War I, and both men survived the trenches. God used those experiences, and that unlikely friendship, to ignite the literary imagination of both men. Had there been no Great War, followed by a great friendship, there would have been no Hobbit … no Lord of the Rings … no Narnia. Think of what the world would have missed.

Like Lewis and Tolkien, you have no accidental friends. Every friendship has a divine spark, and a divine purpose. “Two are better than one, because they have a good reward for their toil. For if they fall, one will lift up his fellow. But woe to him who is alone when he falls and has not another to lift him up (Ecclesiastes 4:9-10).”

One of the most memorable things said yesterday by President George W. Bush in the beautiful eulogy which he gave for his father, President George H. W. Bush, was this: “Dad could relate to people from all walks of life. He was an empathetic man. He valued character over pedigree. And he was no cynic. He looked for the good in each person and he usually found it.” After the viral “candy incident” at the August funeral of Senator John McCain, when Bush handed Michelle Obama a cough drop and it caught our nation’s eye, Mrs. Obama said publicly of Bush 43: “I love him to death.” This is the power of friendship, and we all need it.

Take the time to thank the Lord for the friends in your life. They are gifts.

If you read this, Brandon, I want you know that I’m grateful to God for you. You are a grace-gift to me, and to my family. Merry Christmas, friend!

4 comments on “The Man with the Dragon Tattoo”