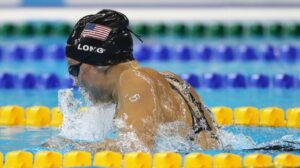 You were probably as blessed as I by Toyota’s Super Bowl commercial featuring the impressive but humble athlete, Jessica Tatiana Long. Alexandra DeSanctis of the National Review called it “the most touching ad during the Super Bowl.” In terms of overall popularity among all of the other high-priced advertisements this year (the average was $5.5 million per 30-second spot, down just slightly from 2020), this particular ad earned the number-five spot when the evening was said and done. The ad’s punchline was this: “We believe there is hope and strength in all of us.”

In case you missed the ad, or in case you’re unfamiliar with the backstory, Jessica Long is a 28-year-old American swimmer who has won 13 Paralympic gold medals, making her the second-most decorated Paralympian in history. She and her brother were born in Bratsk, Russia, but were adopted by an eager American family from Baltimore. Jessica was one-year-old at the time of her adoption and then had to undergo the amputation of both of her legs, below the knee, shortly thereafter. The tragic amputation was necessitated by a complex medical condition, and more than a dozen additional surgeries have followed.

The 60-second game night commercial took us back in time to the events leading up to Jessica’s adoption, and it highlighted a conversation between Jessica’s adoptive mother and the adoption worker …

Mom: “It might not be easy, but it will be amazing. I can’t wait to meet her.”

(Charles chokes back tears.) We call that grace.

Jessica began her swimming career in the backyard of her grandparents’ home on Sunday afternoons. She ended up, for a season, in the same training group as Michael Phelps. That was under Bob Bowman, the head men’s coach for the 2016 Team USA in Rio. That same year, Jessica was quoted: “Winning gold medals is incredible and obviously it’s what I want to do, but there’s something so special about having a little girl who has just lost her leg from cancer come up and tell me I’m her hero.” And I’ll share with you another quote from Tokyo in 2020 because it capture’s Jessica’s indomitable spirit: “Every day, I walk with two heavy prosthetics. I may be a Paralympic athlete, but that doesn’t take away the fact that walking is hard. The water has always given me so much freedom. Since I was a little girl, the water has been this place in my life where I just didn’t feel the weight.”

There is probably nothing in the entire Bible that pictures the grace of God toward us more beautifully than does the doctrine of our spiritual adoption. IN JESUS CHRIST, you and I are given a new name, a permanent identity, a forever family, an inexhaustible supply of provision and protection, and an irreversible inheritance! And all of these things we simply freely receive from God. In this life, just like for a child who has been physically adopted, we may struggle with whether or not we are really that loved … can we really believe such good news? … but the truth is: yes, we really are that loved! You and I need to look no further than the cross. Lord, help us remember!

I would encourage you to read and to reread until you’re filled with joy, Ephesians 1:3-6. You and I are the handpicked, and unreservedly loved, children of the living God! We are the Beloved. And that unequivocal status of endearment can never be changed.