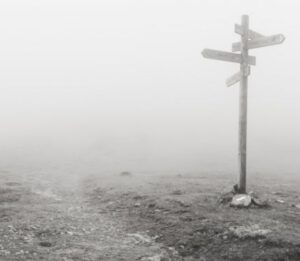 Today I want to take up the subject of the gray zone. No, I’m not talking about Chicago winters, which can seem to hang on until May – though I remember them well. Nor the world of law. And I’m not talking about the independent news website or anything connected to the U.S. Army. Nor am I intending to conjure up images connected to sports terminology of any kind. Instead, today I’m pondering those long spiritual seasons of waiting and wondering: “God, are You still there?” I call it the gray zone.

In the eleventh chapter of Matthew (check out the first six verses), John the Baptist finds himself in the gray zone. We believe that John was imprisoned in Machaerus, a fortress built by Herod the Great. You may remember that Herod had it in for John because John had called out the king for his sexual immorality. So John’s ministry lasted a short two years. The John who had enjoyed the privilege of introducing our Lord Jesus as “the Lamb of God who takes away the sin of the world,” and who had experienced the special honor of baptizing Jesus as well, comes to the end of what he can understand. Think about that. John is so despondent over his unjust confinement that he sends a desperate question to Christ: “Are you the one who is to come, or shall we look for another?” A heavenly window had been opened, and John had uniquely observed God the Father’s absolute approval of God the Son, but … by now … John is not so sure.

I’ll bet you can relate.

Technically speaking, Jesus answers John’s question by sending back to him Messianic quotes from Isaiah. Jesus confirms that His own ministry is perfectly in line with legitimate Old Testament expectations. But – here’s the part that I don’t want you to miss – not one of the words or actions of Jesus results in any change in John’s immediate circumstances. Think about that. The lame are being set free, miraculously, to leap for joy … but John the Baptist will remain behind bars. Let that sink in.

It would be easier – much easier – for us to accept this account if we could establish from the text that John’s own bad behavior had landed him in this predicament. But precisely the opposite is true. The following verses serve only to establish that John is a fine man, by any estimation. By Christ’s own testimony: “Among those born of women there has arisen no one greater than John the Baptist.” But the calling of John is to suffer in seclusion, and not even to understand why all of this is happening to him. My hope today is that you and I will crawl into the story, and recognize that there are times when our calling is precisely the same. The gray zone is, sometimes, our zone.

When we are waiting on some situation in our lives to change, and when it doesn’t seem to be changing, that is the perfect time for doubts to creep into our psyches. Second thoughts. Woulda. Shoulda. Coulda. Been there? John was entirely human, and that’s where he found himself: “I must have made some mistake!” Christ-followers must often walk through seriously dark nights of the soul, and at least some confusion is guaranteed. Some people report that their moments of doubting seem to have eased into days of doubting. But, sometimes, days of doubting can rush headlong into weeks and months of doubting. You get the picture.

But what do we learn from John? It might feel like a train wreck, even when I’m on the right track. This is where the rubber meets the road. This is where our faith is tested, and strengthened for the days ahead. This is where we lean not on our own understanding.

But, instead, this is where we know that our sovereign Lord is directing our path. He is always illuminating the way forward, but sometimes we get just enough light for the next half-step. God hasn’t promised us ease along the entire road, friends, but He has promised us all the wisdom required for the journey – if we will only ask. I’m just reminding you to ask. Right now. Ask.

Many years later, Corrie ten Boom would languish under the evils of the Nazis. She and the other members of her Dutch family had done the right thing: they had helped many Jews escape the Holocaust. But they had been caught, and it was in a concentration camp where Corrie would learn to trust the Lord. It was in the loss of every personal freedom that Corrie would come to understand the freedom of her own soul. No one could take away that freedom. And there, among the horrors of a godless and brutal regime, Corrie would learn to pray. She wrote: “The wonderful thing about praying is that you leave a world of not being able to do something, and enter God’s realm where everything is possible. He specializes in the impossible. Nothing is too great for His almighty power. Nothing is too small for His love.”

We know from the story of John, and from our own lives, that not everything works out according to our wishes. “Getting everything we want” would not be Christianity, but a genie in a bottle. But God’s Word reminds us that everything, ultimately, is working for our good and for God’s glory. I’ll take that over a genie any day.

In the Bible passage before us, I notice one more shocker from the lips of Jesus, as Jesus commends John: “The one who is least in the kingdom of heaven is greater than he (John the Baptist).” What in the world? Here’s what I make of that. Every follower of Christ – today – ought to know more than John ever knew. You and I have even greater spiritual opportunity than John. We have the fullness of the Biblical revelation at our fingertips, and we have 2000 years of church history to demonstrate before our very eyes the unstoppable faithfulness of God. We are His people! He has never left us. Nor will He leave us now.

With greater opportunity comes greater responsibility, so let’s get out there in this crazy world and make Christ known! At times, the gray zone will be ours to contend with, but you and I have an all-sufficient Light to lead the way …

3 comments on “The Gray Zone”