Dr. Paige Patterson has been fired from his post at Southwestern Seminary, but his detractors are still angry. They say he got too many perks on the other side of the deal. Patterson made remarks about women and girls which should not have been made, and he gave flawed advice to female victims of assault, but the question in my mind and heart today is this: what critical life lessons are being served up for you and me?

Patterson’s situation is just one of several which have rocked our evangelical bubble in recent weeks. #MeToo has reached the church, and what appears to be a holy reckoning is underway. In anger over Patterson’s firing, another prominent Baptist pastor posted something on Facebook for 90 seconds – meaning he quickly took it down – but that was long enough for a kill shot. People had already copied the text and the photo, and it went viral. In my opinion, this man’s public ministry is over.

I’ve been thinking a lot about the politics of our denomination over the last few weeks. Two candidates for President represent two very different visions for the future of the Southern Baptist Convention. Dr. Steve Gaines, the current President, has appointed me to serve as a Teller at the SBC annual meeting in June. Quite honestly, I will land in Dallas with a bit of apprehension. What is ahead, organizationally, for the people called Southern Baptists? How contentious will the proceedings be when it’s all said and done? As has been threatened, will people walk out when the annual convention sermon is preached, outraged because Patterson is in the pulpit? We should be much in prayer, as the unbelieving world will be watching in real time as all of this unfolds.

I need to be a shepherd and a teacher for a moment, so please bear with me. These concerns are like fire in my bones, and I must get them out. 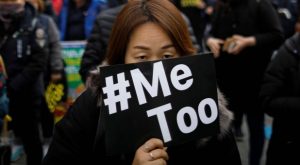 Sexual violence is a huge problem in American life. The Centers for Disease Control reports that one out of every five American women has been raped. 23 million women. The CDC also reports that 44% of American women have experienced some other form of sexual violence. That means that 53 million American women have been subjected to sexual harassment, sexual assault, or some other gender-based violence excluding rape. That is a national crisis. So the #MeToo hashtag birthed last year by actress Alyssa Milano was just the tip of the iceberg. For the church to ignore this cultural and moral catastrophe would be tantamount to spiritual malpractice. How we handle this, and how we minister to victims, will speak volumes. Christ calls us to nothing less than swift and gracious action!

Throughout His earthly ministry, our Lord Jesus elevated women. The Romans devalued women to the point of a husband’s life-or-death power over his wife. The Greeks forbade women to speak in public. The Jews silenced and segregated women too. But Jesus, to the dismay of His friends and His enemies, was radical in His respect for women! He started a conversation with a Samaritan woman in public, and He offered her living water for her thirsty soul. And that was only the beginning. Instead of capitalizing on vulnerability, Christ modeled protection and empowerment.

We must do the same. No bawdy Stormy Daniels jokes, please, or anything else which belittles any person created in the image of God. People are watching and listening, and we want them to see and hear Jesus. If any woman is being abused, we are to call the authorities at once, and to do everything in our power to intervene, rescue, and redeem. No handling of criminal activity “in house,” which only furthers the suspicions of many women that they are unsafe, even at church. There shall be no conspiracy of silence on our watch!

With all of that being well established, I need to offer just a little more in the way of (hopefully) wisdom for such a time as this. We need to be wary of extremes. On the one hand, there is the denier. This is the person who claims: “We have no problem. Harvey Weinstein may have stepped out of bounds, but women who feel abused or threatened by men are overreacting. There is no crisis in the culture, and there is no threat to the integrity and witness of the church. This is all just a choreographed smokescreen for political gain.” The denier is wrong, and any church adopting this posture will do so to its own internal demise.

On the other hand, the opposite extreme is equally perilous, and equally wicked. This is the person who longs secretly for men to be destroyed. “Let’s bring down the patriarchy, with no presumption of innocence, and without basic human decency. If a few guys fall victim to the overreach of our movement, so be it. The injustice we’re up against is so vile that the ends justify the means.” Surely, like the impending disaster posed by the denier, this would never be the way of Christ.

Friends, social media only fuel both fires. Be very, very careful. We belong to Another. Never forget that.

These are tense and tough times. We have to deal with hard subjects. We have to talk about things in church which would have made our grandparents blush. Because, if we fail to deal with life as we find it, we will leave our children and grandchildren unprepared and ill-equipped to navigate the coming twists and turns in the road. The theologians known as Rascal Flatts said it well: “God blessed the broken road.” It’s the road we’re on, by faith.

Wherever you are, and whatever you’ve experienced, never lose sight of the power of forgiveness. We are the forgivers – it’s simply who we are (Matthew 6:12). As the dark evils of our nation stream more and more into the light of day, a spirit of vengeance and hatred mounts. But that’s not who we are, in Christ.

Just one more thing, please. Our world is broken, but we are not without hope. In Dallas and to the ends of the earth, Oh Jesus, please bless our broken road!

5 comments on “The Broken Road”