I hope that you’re happy with your holiday plans for this week. Many of us will be traveling; many of us will be hosting family and friends who have traveled to be here. We’re blessed to live in a nation where we know the freedom to head “over the river and through the woods” if that’s what we need or want to do. And there’s much to be thankful for, whether we’re roaming or home-ing.

Ah, Thanksgiving. One of my grandmothers made the best giblet gravy you ever tasted. Though, as I confessed Sunday, I like gravy of any stripe. My other grandmother made the best cornbread stuffing you ever put in your mouth. It was so moist, somehow, that it really didn’t need the extra gravy that I – of course – always poured on top of it. All of these moments of delight transpired before I ever gave cholesterol a thought, of course.

Some 33 million Americans are predicted to skip the turkey and trimmings in lieu of expanded shopping opportunities. The frenzy that historically has marked the busiest shopping day of the year – “Black Friday” – will start some 12 to 24 hours earlier this year. So it’s not hard to imagine how real “thanksgiving” might be lost if we’re not careful. Don’t let that happen. Thanksgiving is too wonderful to miss.

Our American Thanksgiving celebration goes back to the Pilgrims, who were Puritans, and who paid an almost indescribable price to gain their religious freedom. Serious setbacks plagued their journey from the start. Leaving Southampton aboard two ships, they were forced back when one began to leak. A second attempt was also thwarted by a leak. 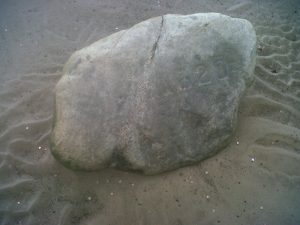 William Bradford recorded their perilous journey. Prosperous winds gave way to widespread seasickness. But God’s providence prevailed. Through violent crosswinds and storms, by which the Mayflower and its passengers were thoroughly battered more than once, one of the vessel’s main beams cracked and threatened to rip apart the ship in the middle of the Atlantic Ocean. Just in the nick of time, and before the beam completely buckled, God’s people discovered a giant iron screw that they had brought from Holland. They were able to raise the beam and survive what had appeared to be their last earthly test.

The Pilgrims set ground at Plymouth Rock (more than 600 miles off course, mind you) on December 11, 1620. Eileen has two sisters in Plymouth, so today’s photo is one I snapped on one of our family voyages in that part of the world.

That first winter for our Pilgrim forebears was nearly completely devastating. By the beginning of the next autumn, they had lost 46 of the original 102 who sailed on the Mayflower. But the harvest of 1621 was a bountiful one, and the colonists decided to celebrate with a feast including 91 Indians who had helped the Pilgrims survive their first year. Three days of Thanksgiving followed. That spirit of humble gratitude and praise carried the Pilgrims through what would continue to be a very difficult life on our Eastern Seacoast.

And the Pilgrims appear to have been unashamed to express collectively their gratitude to Almighty God. How are you and I doing in that regard (Hebrews 10:25)?

The Pilgrims were shaken, but unshaken. If that describes you as your 2013 winds down, perhaps Thanksgiving makes absolutely perfect sense.

2 comments on “Shaken But Unshaken”