I write these words on International Holocaust Remembrance Day 2021. Today marks the 76th anniversary of the liberation of the Nazi German death camp, Auschwitz. Six million Jews were systematically terminated in 35 countries. Adding to the horror of that period, an additional three to four million people, whom the government deemed inferior and undesirable “enemies of the state,” perished at the hands of the Nazis. By remembering, we seek to do our part to make certain that no group of people is ever dehumanized to the point of disposability. 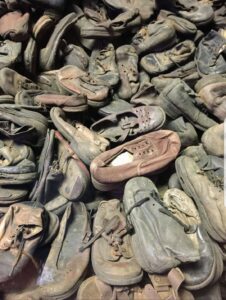 As Christ-followers who take the Scriptures seriously, an overarching and sobering doctrine never escapes us. We recognize that the intrinsic depravity of human nature tilts every chapter of history toward the basic disregard of human life. This sad reality is proven throughout the ages, from Cain and Abel in early Genesis to this year’s violence in our nation’s streets. It can feel overwhelmingly disheartening to consider the incredible cruelty with which people can treat others who are made in God’s image, while at the same time it inspires us to long for our Lord’s return to make all things right.

We ought to take the time to remember every genocide: the Armenians, the Cambodians, the Kurds, and so on. We ought to remember the atrocities of the Serbs, and Mao in China, and the Soviet atheists. We ought to remember Rwanda, and Darfur, and the Democratic Republic of the Congo. In examples large and small, the reality of humans acting inhumanely hits all too close to home. Solzhenitsyn got it right: “The line dividing good and evil cuts through the heart of every human being.”

And, friends, we ought to remember the American genocide of the unborn. Not six million, but sixty million. Consistent with the Bible’s warnings in regard to human depravity, the origins and history of Planned Parenthood are steeped in white supremacy and racial hatred. Pro-abortion advocates are forced to argue that human beings inside the womb are not people, and thus they attempt to reason that the legal termination of pregnancy is not genocide. But I have never read or heard a single cogent explanation as to how a human can be a non-person. Even our legal system acknowledges this inconsistency: when a pregnant woman is murdered, the murderer is usually charged with a double homicide.

My goal today is not to depress you, but to summon you to humble prayer. As a nation, we are a people in desperate need of the hope of Christ’s gospel. If hearts don’t change, behavior never will. And, as the church, we are a people in desperate need of the fruit of Christ’s Spirit. When it comes to the sanctity of human life, we will never change a single mind by browbeating or shaming. In fact, our desire should be to do neither. It is the kindness of God that leads sinners to repentance. You and I, as mere recipients of undeserved grace, must seek the Lord for the humility that we need right now. At this critical moment in history, we must embody the life-giving light of supernatural kindness amidst a culture that is increasingly blinded by spiritual darkness.

To defend the most defenseless among us will require a bold gentleness, a steady tact, and a pervasive winsomeness that aren’t naturally ours. But right now counts forever, so try we must. Perhaps remembering whose image we bear will be our most important act of remembering. So, please remember.

And, as you remember, may love and light be yours in abundance!