If you’ve seen the Johnny Cash story, Walk the Line, you remember the old prison. The same prison was featured in The Green Mile with Tom Hanks, the movie based on Stephen King’s novel.

From there east. Over a 50-mile path that can be mapped, with widespread damage stretching well beyond 90 miles. At least an EF-3 rating on the Enhanced Fujita scale. Like a monstrous, deadly swath barreling through Monday night. At least 22 dead. 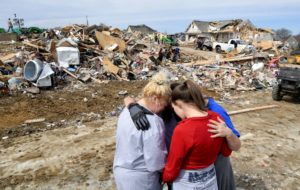 Nashville and its neighboring communities are close to home, friends. We saw the severe weather just outside our windows here in Paducah, but it was nothing like Putnam County, Tennessee. Are you familiar with Putnam County? You drive through it on your way to Knoxville. Putnam County was named in honor of Israel Putnam, a hero in the French and Indian War, and a general in the American Revolutionary War. Its county seat is Cookeville.

Tuesday morning in Putnam County, 18 had perished. Parrish Burgess posted on Facebook: “Our worlds are shattered.”

Jessica Clark was in her 30s.

Dawson Curtis, a little girl, was 6.

Stephanie Fields was in her 30s.

Erin Kimberlin was in her 30s.

Joshua Kimberlin was in his 30s.

Sawyer Kimberlin was only 2.

Sue Koehler was in her 50s.

Todd Koehler was in his 50s.

Bridgette McCormick was 12. She went by the name Ann Marie.

Jamie Smith was in his early 30s.

In that storm-ravaged middle Tennessee community, Terry Curtis was a business owner known for “fiercely” loving his wife and family. Terry could have been any one of us.

Not one of the storm’s victims went to bed Monday thinking that night would be their last. Not one. That’s how life and death work, you see. We never know. But I’ll bet that if I did know that tonight would be my last, I wouldn’t waste my time checking Instagram. Nothing against Instagram, mind you. I just wouldn’t waste any time.

Death was a stranger to me until I watched my Aunt Lela wither away in 1983. Pancreatic cancer destroyed her body in no time flat. As the space between that dear lady’s breaths gained greater distance, I wanted death gone. But, in the end, only my aunt was gone. It would be the first of many such up-close-and-personal encounters with death for me, and I know well the sorrow that pangs the human soul when the mortuary van drives away under the cover of midnight blackness.

Jesus told us (Luke 12:35-40) to live ready: “Stay dressed for action and keep your lamps burning!” Whether or not you and I are still here when Christ returns, we will soon give an account. We must be ready. Always ready. This present chapter is short, short, short.

And here’s the really strange thing. That same “death” which was once only our enemy is – because of Christ – also our entryway …

What delights await the Christian believer at the moment of death! One moment I’m a feeble sinner experiencing the craziness of this world, and – next instant – I’m crowned with a crown of righteousness and hanging out with the King of Glory! All because of Jesus. “It is finished!” No more loss, grief, pain, discomfort, confusion, weariness, or even regret. And no tornadoes! Not a single one on the radar screen. You and I will dwell in nothing but utter joy, as we revel in the beauty of our Savior forever and ever!

3 comments on “Putnam and Providence”